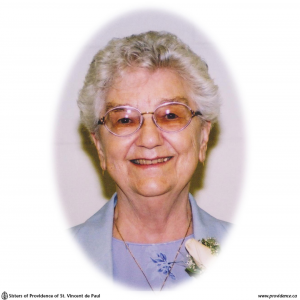 She was born January 18, 1916 in Fife Lake, Saskatchewan of immigrant parents from Austro-Hungary. She received her early education in the rural school located 5 miles from the family farm. When she was 12 years old she went to the Ursuline boarding school in Vibank, Saskatchewan to begin high school. Her school year ended abruptly when her father died the following February of a ruptured appendix. She returned home to help her mother. The depression years that followed were a cause of great hardship for her family.

Sister M. Felicitas had met the Sisters of Providence at 12 years of age when the Sisters came to their parish on a collection trip and stayed at her home. She became particularly interested in the ministries of teaching and in the orphanages in which the Sisters worked. So when her brother married and her mother was no longer needed on the farm, Sister was able to pursue her vocation. She applied to and entered the Congregation of the Sister of Providence of St. Vincent de Paul on August 12, 1932.

After she made her profession of vows, she was sent to Edmonton to complete her high school education. Although she had dreamed of being a teacher, she entered the nursing field at the request of the Congregation. She graduated as an R.N. from Providence Hospital School of Nursing, Moose Jaw, Sask., followed by one year as supervisor of the Obstetrics Department. In 1945 she earned a B.Sc., in Nursing Education from the University of Ottawa. She served many years as Director of Nursing and Director of the School of Nursing at St. Mary’s Hospital, Montreal. Later she became Director of Nursing Education. During her 26 years at St. Mary’s, she became involved in the various Nursing Organizations – local, provincial and international. She held different positions in the nursing Associations, and became the first Sister to be elected President of the Canadian Nurses’ Association. In this capacity she visited every province in Canada, as well as Europe and Australia. Sister was instrumental in developing an education-oriented method of preparing nurses different from a ‘training’ model. In 2003 she was a recipient of the Commemorative Medal for the Queen’s Golden Jubilee for her role and many contributions as the Canadian Nurses’ Association President.

Sister was able to continue her own education and in 1954 received a Master of Nursing Education from the Catholic University of America in Washington, D.C. When in 1971 she applied to enter a doctoral program in psychology with a scholarship from the Canadian Nurses’ Foundation, she had to decline it because she was elected as a General Councillor of the Congregation. As a Councillor, she became a member of the boards of directors of several hospitals. During this time she was a member of the Queen’s Sciences Complex, Kingston, Ontario, President of the Board of Directors of St. Mary’s of the Lake Hospital, Kingston, and she established the Board of Directors for Providence Manors, Kingston, becoming its first President. In recognition of her outstanding contributions in the health institutions, she was awarded an Honorary Doctorate of Laws from Queen’s University in 1974 and gave the convocation address on that occasion.

When she reached her 60th year in the community, Sister Felicitas decided it was time to retire. During her retirement she was assigned to “family ministry” which enabled her to be present to and give assistance to a dear friend in her time of need. Sister M. Felicitas remained in this ministry until her recent illness forced her to go to the infirmary.

After a long and fulfilling life, Sister embraced her illness with resignation becoming an inspiring witness of total abandonment to God’s plan for her. Numerous people, both within and outside the Congregation whose lives she touched, held her in high esteem.

She will be fondly remembered by her sister, Sister Margaret Wekel OSU, of Chatham, her former nursing students, her many friends, and by the members of her religious congregation.

The Mass of Christian Burial, held in the chapel of Mary Mother of Compassion, Providence Motherhouse on June 18th was presided over by Most Rev. Francis J. Spence, Archbishop Emeritus of Kingston. Rev. Leo Byrne, homilist, and several members of the clergy were in attendance as were many of her former graduates and the past president of the Canadian Nurses’ Association.