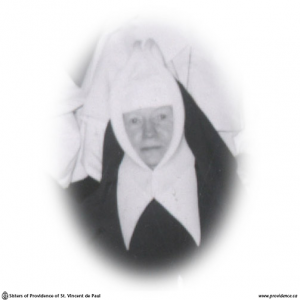 Sister Mary Felix died at St. Mary’s of the Lake Hospital on January 6th, 1957, after a long illness. Sister was born in Madoc, of a large family of brothers and sisters. She entered the Novitiate, then at St. Mary’s of the lake, on June 29, 1910, and was soon followed by an elder sister, Sister M. Gerald; both proved faithful members of the Community.

Having made her religious profession in 1912, she began her nurses’ training at St. Vincent de Paul Hospital, Brockville, and after her graduation remained on the staff there for some years. Later, on the Western missions she devoted herself to the care of the sick at Providence Hospital, Moose Jaw, Providence Hospital, Daysland, and St. Joseph’s Hospital, Edmonton. When she returned East in 1946, she was appointed to St. Mary’s of the Lake Hospital, then newly opened as a hospital for chronically ill patients, and remained a member of  the staff at St. Mary’s for ten years.

Besides being a diabetic, Sister M. Felix had suffered much in the West from other illnesses and on one occasion almost died from typhoid fever. After she returned to Kingston her health was uncertain, obliging frequent periods of hospitalization, but she was always ready to help whenever she could or do night duty if at all able. Finally in 1956 she was laid prostrate with a stroke and her last year on earth was one of intense suffering.

Sister was a zealous religious, good and pious; she was endowed with a strong spirit of faith; she was kind and generous almost to excess. This same generosity was characteristic of her family; her brothers were signal benefactors of the Community. May this spirit have its proportionate reward in each and all throughout eternity.

His Grace, Archbishop O’Sullivan, offered the funeral Mass, with fifteen members of the clergy present, in St. Mary’s of the Lake Convent Chapel. One brother survives and her sister, Sister M. Gerald, Camrose.