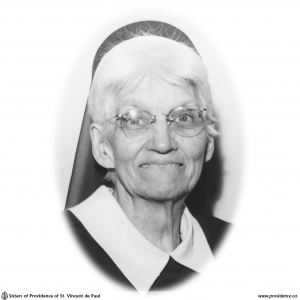 Mary Stella Masterson, one of nine children of James Masterson and Ellen Foley, was born on November 22, 1903, in Chesterville, Ont.

Mr. James Masterson attended elementary school in Cannaught and on reaching adulthood, he decided to make his way in the world. He and a school companion left for Portland, Oregon. One of his loves was fine horses so he was secured a job with a man who kept horses. The man was an atheist, but he hired James on the condition that he would give him a horse and buggy to drive to the nearest church, which was miles away, to attend Mass on Sundays. At the end of seven years, he realized that Canada was a better place for him, so he told his employer his plans. His employer really grieved when he realized that he was adamant in his decision. He presented him with the best watch he could buy at the time, which James said had never stopped after sixty years of service. James was not accustomed to handling large sums of money through banks so he decided on a more practical way. His employer paid him in gold coins which he inserted in a belt, which he wore home for safety. He wrote to his parents about his plans to return, and every evening his mother walked out the long shady lane to see if her “Jimmie” was in sight. One evening she saw a figure coming down the hill, and sure enough it was “Jimmie”. He carried her all the way to the house, and to their great surprise, he gave them every cent of his earnings to pay off the mortgage on the farm. The next day he went to Chesterville to find a reliable man to change his coins. He consulted Mr. Chester Cassselman who owned a general store. Mr. Casselman was overwhelmed with surprise, and asked: “How did you come by this?”  On hearing how he obtained the gold coins, Mr. Casseman told him that if he ever wanted a job there would be one available to him in his store, but James was interested in farming. After marrying Ellen Foley, they lived on rented farms until they purchased their own farm close to the homestead.

Prior to her entrance, she received her elementary and junior high school education in Chesterville, and finished a one year Commercial Training course. Following her profession on March 27, 1931, at which she took the name of Sister Mary Fergus, she went to Gananoque to do church work and housekeeping. On March 27, 1934, Sister Mary Fergus made her Final Profession at Providence Motherhouse, Heathfield, Kingston.

From Gananoque, Sister Fergus went to Tweed where she performed the duties of housekeeping and sacristan; at Maryvale Abbey in Glen Nevis was mistress of boarders; at Rosary Hall in Toronto was in charge of the residents quarters; and she then worked at the House of Providence in Kingston and the Dowd Memorial Home looking after the elderly until she retired to Providence Motherhouse. For many years Sister was the Pray-er for the General Superior and Council and was very faithful to remember them in her daily prayers. Sister had a great love of her family and had a keen interest in all of them.

After many years of illness, Sister Mary Fergus died on August 27, 1990, in the 61st year of her religious life. Msgr. T. J. Raby, assisted by several priests, presided at the funeral Mass.