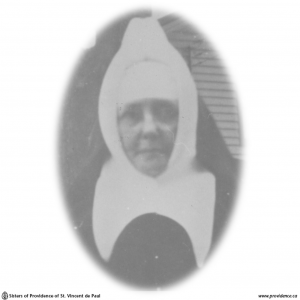 Sister Mary Fidelis died at 2 a.m., Wednesday, February 16, 1955, in St. Vincent de Paul Hospital, Brockville. She had been ill about seven months, suffering from a cancerous condition.  Sister was in her eighty-fourth year and fifty-ninth of religious life.

Margaret Black, as she was formerly known, was a daughter of the late Patrick Black and Elizabeth Keenan. She was born in Glenburnie, Ontario, the eldest of a large family of boys and girls, and entered the Novitiate at the House of Providence, Kingston September 20, 1896.

After profession Sister was sent to St. Vincent de Paul Hospital, Brockville, to take up nursing, and was one of the first graduates of the Hospital, under Miss Cleary, first superintendent of nurses at St. Vincent’s. Here she remained a devoted member of the nursing staff until she was appointed superintendent of nurses to St. Francis General Hospital, 1914. Later, she was appointed local Superior of the Hospital for a number of years. Following this Sister was nine years local Superior of St. Michael’s Convent, Belleville, six years assistant at the House of Providence and the last eleven at St. Vincent’s where she was assistant part of the time, and had charge of the Priests’ breakfast room until her illness.

In 1949 she had the privilege of celebrating her golden Jubilee which brought her many much appreciated special blessings.

Sister M. Fidelis was blessed with many beautiful qualities of mind and heart. A good religious, she was always edifying, kind and lady-like, and a much beloved member of her community. She told of a nice custom her own good father taught her; to make the sign of the Cross on her lips in using holy water, that she might avoid ever speaking an uncharitable word. God alone knows the good effect of this pious little practice in helping to maintain a charitable outlook for herself and others.

A solemn High Mass of Requiem was offered at St. Vincent de Paul Hospital chapel on Thursday morning following which the remains were taken here to the Mother House. Pontifical Funeral Mass was celebrated in our Chapel on Friday morning by His Grace, Archbishop O’Sullivan, assisted by a number of the city clergy. Burial was in St. Mary’s cemetery. Reverend Father Flurey recited the prayers at the graveside.