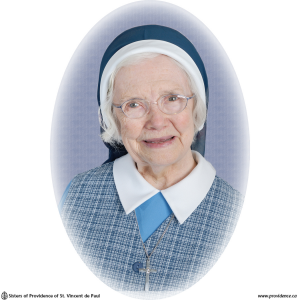 Mary Elizabeth Cunningham was born on May 11, 1920 to Elizabeth Black and Bernard Cunningham in Kingston Mills, Ontario the second of two children. Her brother, Bernard, died suddenly at the age of 15 of acute appendicitis. While she was attending Notre Dame High School, her mother became ill and died.

She and her father then moved to her father’s previous home where her father’s brother and sister were living. It was at this time that she became involved with the church choir and, having taken music lessons at Notre Dame, enjoyed playing the church organ. After a few years her aunt died and later her uncle. Her father died suddenly in August 1956 as the result of a stroke.

On February 2, 1957 she entered the novitiate of the Sisters of Providence of St. Vincent de Paul in Kingston having been encouraged by her mother’s sister, the late Sister Mary Fidelis. In light of this, it is not surprising that Mary took the name Sister Mary Fidelis at her Profession.

Following her First Profession, she took the Registered Nursing Assistant course at St. Vincent de Paul Hospital in Brockville. From 1961 to 1967 she nursed at Providence Manor and in the Marian Infirmary at the Motherhouse. She then moved to St. Anthony’s Home in Moose Jaw where she nursed until 1985 and then was assigned as a Pastoral Care Worker. During her years at St. Anthony’s she was a member of the Governing Board until 1990 and the Medical Management Committee until 1995 as well as Head of the Central Supply Department. From 1995 until 2005 she continued working in Pastoral Care at the new facility, Providence Place for Holistic Care. She served on the Board of Trustees of Providence Place from 1995 – 2002. In 2005 she returned to the Motherhouse. By 2011 she took up residence in the Motherhouse infirmary due to failing health.

Gifted with a calm, nurturing, quiet and gentle nature, Sister was deeply loved and highly respected by both patients and Administrative Staff at Providence Place.

The Mass of Christian Burial, held in the Chapel of Mary, Mother of Compassion, Providence Motherhouse on December 11, 2015 was presided over by Most Rev. Brendan M. O’Brien, Archbishop of Kingston. Rev. John Brennan delivered the homily. The Rite of Committal was at St.  Mary’s Cemetery, Kingston.