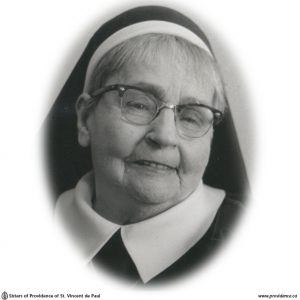 “Her name, ‘Fidelma’, seemed to sum up her life of gentleness in nature, littleness in notice, but thoroughness in service.” In these words Father Tom Raby, in the funeral homily attempted to capture the essence of the life of Sister Mary Fidelma (Pickett), Sister of Providence of St. Vincent de Paul. Her life was a simple one, but with depth, even, perhaps, beyond her own fathoming; for whom among us fully understands the worth of our personal response to that grace which is Christ alive in us.

The child, given the name, Elizabeth, at her baptism, was the third of the eleven children born to John Pickett and Bridget Foley, of Howe Island, Ontario. Even to this day the Pickett family is well-known on the Island, because their farm home stands near the ferry dock, and the Picketts have, day and night, for over a hundred years, manned the ferry which takes Islanders back and forth from the mainland. In fact, the first ferry was likely built by the Pickett men of generations past, only for the last fifteen years has the ferry been government property.

The Pickett children received their basic education at the one-room Howe Island School, but had to attend boarding schools – Regiopolis and Notre dame – in Kingston for their high school years. Elizabeth only took Grade 9, and that at the age of 22. Not as out-going as her brothers and sisters, she had been content to help around home until then.

What happened to change her mind? She conceived “one great desire to be a religious Sister” and, in order to enter the Sisters of Providence, she was required to have at least one year of high school.

In every vocation there is an element of the human as well as the Divine. The human portion in this case seems to have been supplied by Marie Prior. The Priors are another long-standing Howe Island family, and Marie, a good friend of Elizabeth Pickett and only two years older, had entered in 1919. She was to make her final vows as Sister Mary Jane, SCSP, August 25, 1924; just ten days after Elizabeth became a postulant.

Elizabeth Pickett was herself to provide some of the inspiration for two other vocations in her own family. Her sister, Helena, became a member of the Congregation of Notre Dame and her brother, Colin, was ordained a priest for Kingston Archdiocese.

As a Sister of Providence, Elizabeth kept to her own style and her own gifts. She was generally reserved and quiet. While Helena and Colin became well-known as teacher and preacher, able to entertain with story after story, for Elizabeth the apostolic path was a more hidden one.

Sister Mary Fidelma’s first assignment was to the kitchen at the House of Providence. Then, her culinary skills honed, she became the housekeeper at St. Michael’s Belleville, and by 1933 was supervisor of the Kitchen at St. Mary’s Home for Boys in Edmonton. In later years, King, St. Malachy’s (Montreal), Picton and Tweed were to benefit from the good meals she served.

At St. Joseph’s Vocational School, Winnipeg, and St. Anthony’s Home, Moose Jaw, and during a later posting at Providence Manor, Kingston, Sister was engaged more in the hands-on care given the residents. As the second oldest girl in a big family, she likely knew the best combination of firmness and gentleness to use with the young boys and aged folk housed in these institutions. Sister Mary Fidelma’s final active assignment was to the Altar Bread Department at the Motherhouse. She came there in 1971.

In 1975 Sister had to take up residence in the Marian Infirmary. She was suffering from circulatory problems and eventually became crippled in hands and feet by arthritis. Over the thirteen years she spent in the Infirmary she suffered many small strokes. For almost the last two years of her life she was a bed patient. However, she had prepared herself well for suffering, her final form of humble apostolate. Since, the 1960’s at least, she had been cultivating a love of the Passion of Jesus Christ, and nourishing in her soul a devotion to the Sacred Wounds. In her prayers was found this one dated April 14, 1965, with a notation, “I composed this for it means a lot.”

“O Jesus I love thee. I am all thine. Take me and place me within Your Sacred Wounds so that I may feel at least some of Thy sufferings and I will have something to offer to Our Heavenly Father in reparation.

The prayer spoke of offering and reparation because it sprung from her willingness to be a victim soul. She used for direction and inspiration a prayer leaflet and a manual specifically for victim souls. In the latter she had marked for frequent use the ejaculation, “My Jesus, I will not complain of this trial, but will silently bear it for love of Thee,” and the page was kept handy by inserting a verse card entitled, “Pluck”. Those who knew Sister in her declining years can testify that, to the end, she lived by her chosen name, ‘Fidelma’.

Sister was fortunate to have her family nearby. The night before she died five of her brothers and sisters were at her bedside visiting, and Sister Helena was praying with her almost to the hour of her passing – 5:10 p.m. on September 11, 1988.

The Lord, in His turn, was faithful, too. Both Fr. Leo Byrne and Fr. Bill Steacy, CSsR, who were residing at Heathfield, were not at home, but Father Paul Baxter, grand nephew of the recently deceased Sr. Mary of the Sacred Heart, was in the house attending his aunt’s wake, and came immediately to anoint the body.

With Sister we put our hope in God’s fidelity to His promise of life hereafter and look forward to being together again with her and with all souls who have kept their faith in Him.