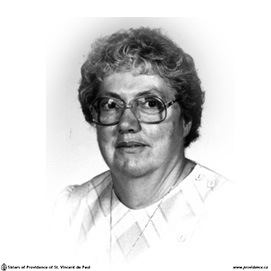 She entered the Novitiate at Heathfield on August 15, 1937 and made her first profession August 15, 1939 at which time she received the name of Sister Mary Tarcisia. She was then missioned to the House of Providence where, under the guidance of Sisters Mary Emerita, Mary Oswald and Mary Laurena, she acquired a few nursing skills, by working in the men’s and women’s wards. She was transferred for one year to the Motherhouse to work in the Altar Bread Department. She then returned to the House of Providence to help in the kitchen. During these years she studied some of her high school subjects. In 1943 she was sent to Maryvale Abbey for a year to study. The next year she spent in Apple Hill assisting Sister Mary Angeline with her students. She returned to Glen Nevis to complete her Grade XIII after which she attended the Ottawa Teachers’ College graduating in 1946. Her teaching assignments took her to St. John’s School, Kingston, Sacred Heart School in King, St. Paul’s School in Kingston, Sacred Heart School in Batawa, St. Mary’s School in Chesterville and St. Joseph’s and John XIII Schools in Arnprior. In 1963 she obtained her Specialist Certificate in Special Education and her B.A. from the University of Ottawa in 1975. Sister was engaged in Special Education for 22 years (1963–1985) in Arnprior. During these years she arranged to obtain financial assistance for underprivileged children in the school. She spent her spare time helping the elderly in their homes and visiting the sick in the hospital and in the nursing home.

A severely broken arm ended her teaching career in 1985. After her retirement she remained in Arnprior for one year before taking a sabbatical year at Spirit House in Rochester, NY and St. Gertrude’s Priory in Cottonwood, Idaho. After returning from Idaho, she spent 8 months at Gabriel Home in Kingston and then took up duties as a pastoral care worker with the Sisters in the infirmary. She always enjoyed conducting sing songs and arranging other entertainment for the Sisters. At Christmas she was the traditional Santa Claus and planned the entertainment for Halloween, Valentine’s Day and Easter. Nothing made her happier than to see the Sisters enjoying themselves.