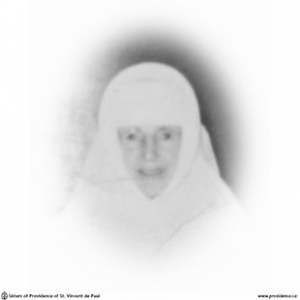 On September 1, 1978, a venerable member of our Community went to her eternal reward, when at St. Mary’s of the Lake Hospital, Sister Mary Flavian died one month before her ninety-second birthday and in the sixty-seventh year of her religious life.

Honora Mary Kearney was born in St. Gregory’s parish, Picton, Ontario, on October 16, 1886, one of a family of ten of Michael Kearney and Ellen Casey.

In childhood she came to know the Sisters of Providence, as she had two aunts among the pioneers of the Community – Sister Mary of the Presentation Kearney, and Sister Mary Beatrice Casey. Later on as a mature young woman she learned about the mystery of religious life and the particular spirit of the Sisters of Providence when her sister Mary Lorette (Sister Mary Carmelita) joined the order. Believing herself called by God to this way of life, she entered the novitiate July 19, 1912.

When she made profession in 1914 she was sent to train as a nurse at St. Vincent de Paul Hospital, Brockville, Ontario, and except for five years when she was Directress of Novices, she spent an active life of fifty-two years in the hospitals of the Community.

In 1953 after the Provincial Departments of Health had closed Schools of Nursing in small hospitals, she initiated at St. Vincent de Paul, Brockville, a training school for registered nursing assistants and continued this work until 1966.

She then spent six years in semi-retirement at Providence Manor before coming to the Marian Infirmary at Heathfield. During her last years she suffered severe impairment of hearing, and lameness resulting from a fractured hip, but these infirmities did not prevent her from following the spiritual exercises of the Community. No weakness or pain could deter her from “hobbling” – as she put it – to the main chapel, or to the oratory of the infirmary for every Mass that was being offered. She was privileged to assist by her presence and her prayers at the death of Sister Mary Carmelita in 1954 and at that of her youngest sister, Winnifred (Sister Mary Claude) in 1977.

By this time her memory had failed and it was impossible for the nurses in the infirmary to prevent her from trying to walk when she was no longer able to do so. Consequently, on July 25, 1978, a fall in her room caused another hip-fracture. She spent four painful weeks of treatment in Hotel Dieu and was then transferred to St. Mary’s of the Lake.  But her age and frail condition made therapy of no avail and she passed quickly and quietly to God on the First Friday of September. A fitting close to a life of devotion to the Sacred Heart in the Blessed Sacrament.

None of the ten of her immediate family survived Sister, but three nieces and a nephew from the Toronto Area, who had visited her regularly during her declining years, were present for the funeral: Mrs. A. Osborne (Mary), Mrs. Bob Gravelle (Frances), Mrs. Grace Guilfoyle, and Eugene Hearney.

His Grace, Archbishop Wilhelm, offered the Funeral Mass on September 4th, with concelebrants Father Matthew Meehan, C.Ss.R. of Toronto and Father Paul McAvoy, P.P., of Elgin (formerly of Brockville) – both of whose families were lifelong friends of Sister’s.

Sister Mary Flavian will be remembered for her indefatigable labor in the care of the sick, and her insistence on perfection in their work by her student nurses, but above all for her life of prayer and of constant striving towards the ideal of a Sister of Providence of St. Vincent de Paul.