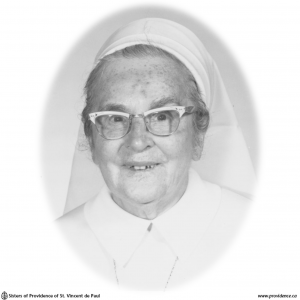 Mary Elizabeth Howell was born in Madoc, Ontario, On January 3, 1907, baptized on January 25, 1907, and confirmed in Marysville on October 3, 1920. She was one of 11 children born to Elizabeth McNamara and Andrew Howell. Mr. Howell was a farmer and the family lived in Madoc until 1912 when they moved to Marysville.

Mary Elizabeth Howell had Grade IX education when she entered, having attended school in Landsdale and Marysville. She went to nursing school at St. Vincent de Paul Hospital in Brockville for one year. After returning home, she decided to enter the Sisters of Providence and came to the House of Providence on February 2, 1925, at the age of 18.

Mary Elizabeth Howell received the Holy Habit on January 11, 1926; pronounced her First Vows on August 29, 1927, taking the name of Sister Mary Florence; and made Final Profession on August 13, 1930.

Sister Mary Florence spent most of her religious life looking after the need of others in the following ministries:

Sister Mary Florence wrote up a genealogy of six generations of the Howell family and sent copies to her relatives. They called her the “family historian”. She had a great memory for details and knew the birthdays of not only her immediately family but also those of her nieces, nephews, grandnieces and grandnephews, as well as the birthdays of many of our own Sisters of Providence. Her family looked to her for advice and they respected her wisdom in the counsel given by her.

As Father Leo Byrne stated in his homily, “she allowed us to look at the important things in life. Prayer was an ordinary part of her every day living and was a priority with her. Her life was a valley which she orchestrated between her religious life and her own family. She was committed to both and was concerned for her family and her religious community. She had a real balance in her life and the ability to extend herself”.

Sister Mary Florence died on January 22, 1990, in Marian Infirmary II and was buried on January 24, 1990. The funeral Mass was offered in the Chapel of the Immaculate Conception, Providence Motherhouse, concelebrated by: