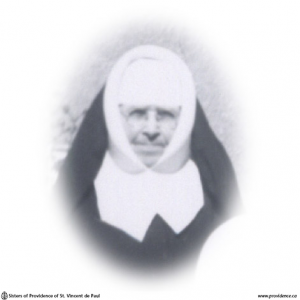 Sister Mary Florentina (Teresa Masterson), daughter of John Masterson and Mary McPhail, was born at Finch in the parish of Chesterville, on November 18, 1881. Of the family of nine, two embraced religious life as Sisters of Providence. Teresa entered the novitiate in 1907, just after her sister Anne had made profession as Sister Mary Margaret.

Sister Mary Florentina enjoyed an active apostolate of fifty-six years. And “enjoyed” is the correct word to describe her life. In her letter requesting permission to make profession, Sister wrote: “I can safely say that my greatest happiness has always been found in assisting others, especially the poor and infirm.” Her gentle, kindly, cheery manner attracted all to whom she ministered, and particularly children. It was to the underprivileged little ones that she devoted many years of her life – fifteen in St. Mary’s Home, Edmonton, and seven in St. Mary’s Orphanage, Kingston. Thirteen years were spent with the aged and poor at the House of Providence. She served as Local Superior at Rosary Hall, Edmonton, St. Mark’s Convent, Prescott, and St. Mary’s Orphanage, Kingston.

In 1959, she celebrated the Golden Jubilee of her profession, and four years later retired to the infirmary of the Motherhouse. Here she was able to follow the exercises of the community until 1967 when a cerebral accident rendered her an almost-helpless invalid, and she was not able to share in the festivities that marked her diamond jubilee in 1969.

She died on April 30, 1970, some hours after Sister Mary Inez. She received the Sacrament of the Sick the morning of her death, the last of many anointing. Throughout that day, prayers were offered continuously at her bedside. Her appearance in death was beautiful, the face youthful, almost smiling, that cheered so many during her life, and now gave no indication of her eighty-eight and a half years.

His Grace Archbishop Wilhelm offered the funeral Mass for her and Sister Mary Inez on May second. There were no survivors of her immediate family – Sister M. Margaret had died in 1961 – but two nieces attended the funeral, Miss Mary Clement of Ottawa and Miss Florence Masterson of Kingston. Sisters Mary Ignatius and Fergus are cousins, as are Father John Masterson, S.J. of Toronto and Father J.D. McPhail of Cornwall.