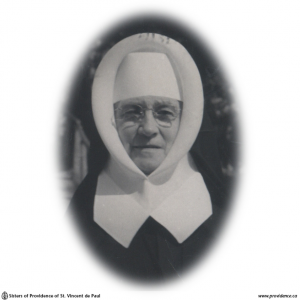 On New Year’s Day, 1980, shortly after 6 a.m., at the Marian Infirmary, Heathfield, Sister Mary Frances Teresa heard and answered the last call of her heavenly Father. How fitting it was that this call should come at the Angelus hour to one who from her earliest years was an ardent client of Our Blessed Lady!

The first call came to Mary Ann Frances Vaughan when she was baptized on May 19, 1898, nine days after her birth, in St. Michael’s Church at Corkery, Ontario. Here a rural settlement near the town of Almonte in Ottawa diocese had been established by immigrants from Ireland. The Vaughan parents, Edward and Frances (Divine) had maintained the traditions of their Irish Catholic ancestors and instilled in their six children a love for their faith and guided them by example in its practice.

When Annie was ready for high school she was sent to Maryvale Abbey, Glen Nevis, conducted by our Sisters. In this shrine of Mary, she came to know something of religious life and very soon heard her second call to leave all things and follow Christ.  So after graduating from Teachers’ College in Ottawa, and teaching for 3 years, she entered the Congregation of the Sisters of Providence. Two of her cousins – Sister M. Gregory Kennedy and Sister M. Inez Manion, were already members of the Congregation. After profession in 1924 she was assigned to St. Margaret’s School, Glen Nevis, where she remained for 5 years. Then followed terms in Smiths Falls, Arnprior, Belleville, Tweed, St. David’s ( Toronto), and St. Malachy’s – Montreal. All in all she completed before retirement in 1968 forty-one years of the teaching apostolate.

During these years she frequently had extra duties – helping the sacristan in the convent, teaching vocal music in the school (for which she had special training); and in Arnprior and in Montreal serving twelve years as Local Superior in the convent. But no one ever heard her complain of overwork; a gentle, kindly disposition, and dedication to the duties assigned her, and a keen, if quiet, sense of humour, along with her strong faith and trust in Providence, kept her free from self-pity.

Yet she had crosses to share with her family. Her mother had died when the children were still young and the eldest daughter, Maymie, had to take on the duties of mother. A sister, Edana, in her early married life suffered a mental break and was forced to spend her remaining years in a psychiatric hospital, or an institution for rehabilitation. Sister visited her faithfully, spending much of her vacation time in these visits. Her third sister Laura, who was a graduate nurse and devoted herself to the welfare of her father and other members of the family, died after a painful illness from cancer.

In 1968 she was assigned light duties in St. John’s Convent, Gananoque, but after five years her memory began to fail and for her remaining six years she was a patient in the Marian Infirmary.

It was painful for those of us who had known her intimately to see this formerly energetic, capable, prayerful religious, who had endeared herself to her fellow-sisters, unable because of physical disability to use her talents of mind and heart. But God’s Providence did not fail her. He gave her the hundredfold in this life promised to those who left all to follow Him. Among the many that cared for her during her years of impaired health, one name stands out. Sister Mary Adalbert, a registered nurse, made Sister M. Frances Teresa her special charge, seeing that she was in the right place at the right time for rising, retiring, meals, and as long she was able, for prayer and Mass.

For some months before her death, Sister was confined to a wheel chair in her room. She seldom spoke, but her lovely smile was a response to visitors. Then during the long weeks of her last illness she was most tenderly cared for by the nurses, both religious and lay; not one of them, I believe, but felt she was a saint.

For several nights a Sister, besides the nurses on duty, remained with her. On her last night Sisters Catherine Casey and Margo Shafer shared the vigil and Sister Gracia Whalen was night nurse. When these Sisters saw that death was near they summoned Sister Muriel, Superior General, and Sister Margaret Rose, Superior of the Infirmary. These, joined by some patients of the Infirmary prayed by her bed, as she breathed forth her soul to God. The funeral Mass was concelebrated by His Grace, Archbishop Wilhelm, Father Paul McAvoy and Father Dan Ryan.

Three members of Sister’s immediate family survive – her eldest sister, Mrs. Maymie Carter, now ninety-five years of age, in full possession of her mental faculties; a brother, John Vaughan – both of Ottawa – who attended the funeral; and a brother James of Carp, Ontario who, because of illness, could not come.