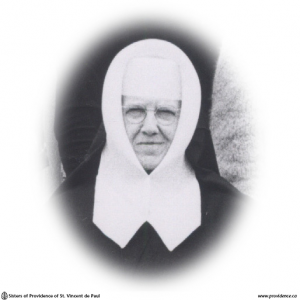 “The Community had lost a great educator”. These words were spoken by Sister Kathleen Garvin, of the Congregation of Notre Dame, Kingston, as she viewed the remains of Sister Mary Francesca at Heathfield on October 5, 1980. Sister Garvin had worked with Sister Mary Francesca for many years in the field of education in Kingston, and in the province of Ontario, and she realized the value of Sister M. Francesca’s contribution.

Evelyn Margaret Kelly was third in a family of ten, whose parents. Patrick Kelly and Catherine McParland had established a comfortable farm home a few miles from the town of Smiths Falls. Both were of Irish extraction, Catherine having been born in Eire Patrick was the typical Irish Catholic, with a keen sense of humor and solid spirituality built on confidence in God and the power of prayer. So the Kelly family were faithful members of St. Francis de Sales parish and generous benefactors of St. Francis Hospital opened by our Sisters in 1904.

It was, doubtless, association with the Sisters that led Evelyn to ask her parents to send her for her final year of High School to our Maryvale Abbey at Glen Nevis.

On graduation, Evelyn attended Ottawa Teachers’ College and taught for a few years in local schools. Then in 1923 she answered God’s invitation to consecrate herself to Him in religious life, and entered the novitiate at the House of Providence.

After profession as Sister Mary Francesca she resumed teaching and devoted to this apostolate over forty years. Her assignments included three years in Kingston, seven in Belleville, and eight in Apple Hill, before she returned to Kingston in 1942 to spend her final twenty-two years. For five years she was on the staff of St. John’s School; then when St. Patrick’s was opened in 1947 she became its first principal and retained that position until her retirement in 1964.

Every Friday evening during these seventeen years, Sister M. Francesca with a sister companion, remained at the school to conduct a night session in religion for children who were not able to attend Catholic Schools.

In spite of this heavy teaching load, Sister found time for many extra activities. She was a regular participant in the discussions of the Ontario Association for Curriculum Development and served on committees with principals of Public Schools.

She was active in her own professional organization, the Ontario English Catholic Teachers Association, serving as first president of the Kingston unit and at the provincial level as chairman of the religion committee.

She devoted much time and energy to the work of the Catholic Parent Teacher Association. She was a member of the executive of the diocesan PTA, and of the provincial executive where she was in charge of programming. Her long and effective contribution to CPTA won for her the “Service Award” presented at the annual meeting of the provincial PTA in 1968 – an honour conferred on only five or six persons up to that date.

Meanwhile the Community requested Sister to add the extra duties of a member of the General Association, duties she fulfilled for twelve years.

In 1964 when she retired from the classroom she served for 6 years Local Superior of St. Carthagh’s Convent, Tweed, and for 3 years of St. Mary’s, Chesterville. She spent two years at St. Gregory’s Convent, Picton until a severe heart attack obliged her to retire to the Marian Infirmary at the Motherhouse in 1975.

In spite of periodic recurrences of her heart trouble, she remained fairly active, visiting daily sister companions who were more seriously ill, praying with them and writing regularly to the families of those who were unable to write.

On October 2nd, she went to Smiths Falls and on the following day to Ottawa to see her eye doctor. On her way home she stopped overnight with her sister-in-law, Mrs. Lenore Kelly, and seemed to be in usual health. But at 5 a.m. on October 4th she suffered her last heart attack; was rushed to hospital, but too late to respond to treatment. The priest administered the last rites of the church and was joined in prayer by members of her family and sisters from St. Francis Convent.

In the absence of His Grace the Archbishop the funeral Mass was celebrated at Heathfield by Monsignor J. G. Hanley, Vicar General, with concelebrants Father Raymond Shannon of Smiths Falls, Gerald O’Hearn of Perth, K. Stitt and D. Ryan of Kingston.  Present were Monsignor Bernard Walsh of St. Joseph’s, Monsignor Welsh of Church of the Good Thief, Father D. Clement of Holy Family – all of Kingston.

Surviving members of her immediate family are one brother, Emmett Kelly of Smiths Falls, Mrs. James McParlan (Hilda) of Peterboro, and Sister Thecla Kelly, C.S.J. (Rosalia) of Nazareth, Michigan, all of whom, with many nieces and nephews, attended the funeral.

Sister Mary Francesca will be remembered as a loyal, devoted member of our Community. Her life of prayer and charity and that refreshing sense of humour (inherited from her Irish father) made her kindly influence felt by her sisters in religion, her pupils and the members of the communities in which she served.

For all these persons, she was indeed a “great educator”.