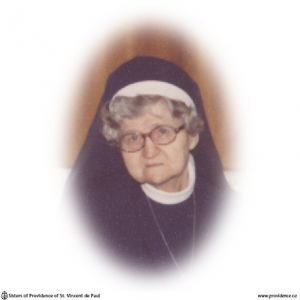 When Sister Mary Francis of Assisi retired after forty-nine years of teaching, William Davis, then Minister of Education and later Premier of Ontario, wrote to her:

“It must be a source of great satisfaction to you to realize the Christian initiative and knowledge you have imparted to so many pupils over so many years. You have made a significant and lasting contribution to the development of elementary education in Ontario.”

The Minister was right. In her retirement days, Sister Mary Francis of Assisi often recalled with just pride the successes of her years in the classroom. It was a career she had chosen for herself before she entered the Sisters of Charity of the House of Providence. She began teaching in 1918 and, except for her canonical year of Novitiate, she taught every year through to June, 1968.

Sister was born in Enterprise, Ontario, on April 23, 1899. She was the daughter of Michael Dillon and Frances Evans, who chose for her at baptism the name, Mary Pauline. The Dillon family of four girls and two boys shared the work on the farm where they were raised and they attended the nearby public school, S.S. #29 Camden. Tragedy struck the family when the oldest girl died of pneumonia at age fifteen and the father passed away at almost the same time. However, Mrs. Dillon managed well and was able to send Mary to the Congregation of Notre Dame High School in Kingston. She was one of the school’s first boarders.

After high school, a year at Peterborough Normal School prepared Mary for teaching. Her first employment was at S.S. #11 Portland, and the year’s salary was $600. She moved on to Stanleyville in the next year and then, in 1920, took her home school at Camden. Her brother, Michael, was one of her pupils there and, as he put it, “an early recipient of her love and interest in others”. She was, in fact, related to several of the students, which did not make it any easier for her to restore discipline in a school where it had become lax. This was the very task that the trustees had pressed upon her. She did not fail them.

Her reputation for firmness combined with excellent instruction and a truly caring approach was known also at S.S. #1 Wolfe Island, where she last taught before entering. Previously three of the pupils in the five-pupil Grade 8 class had been considered not capable of trying their entrance exams. Mary saw them all through to high school.

During these eight years of teaching in country schools, Mary occasionally heard from her cousin, Sister Mary Louise (McKeown), a Sister of Providence. Sister often teased her about the postulant’s “bonnet” that was waiting for her in Kingston. How much influence the gentle teasing had on Mary’s decision to enter is not known. Apparently she had been thinking about religious lifer since high school and had shared dreams with her friend and fellow teacher, Agnes McNamara (Sister Mary Bernarda) who was to enter shortly after her. In any case, on June 3, 1926, Mary wrote asking to be received into the convent quarters of the House of Providence. She was accepted and put right back into teaching while a Postulant.

As has been noted, her career in that profession was to continue almost uninterrupted for nearly half a century. For a brief moment, though, she thought that her days as a religious Sister might be very short-lived. She found the new clothing difficult to get used to and managed, while serving in the dining room, to spill coffee on the Novice Mistress and soup on the Superior General. She retreated to her room and got dressed ready to return home, so sure was she that she would be asked to leave. However, the Sisters had seen many of these “accidents” that newcomers seem prone to and reassured her by their understanding.

In the years after first profession of vows, Sister Mary Francis of Assisi’s assignments took her to Lancaster, Portsmouth, Smiths Falls, Arnprior, Tweed, Perth, Gananoque and several Kingston city schools. In Gananoque the task of being principal was added to her classroom duties. Mrs. Veronica Cliffe, who taught on her staff then, remembers her as a good disciplinarian who mingled justice with kindness and always gave erring pupils a second chance; as having boundless energy to travel many times a day up the three flights of stairs in the building; and as always good to her staff, making time from her duties to relax over coffee with them.

When Sister retired from teaching in 1968, the people of Gananoque gave her a grand party – a testimonial dinner with many telegrams and greetings like the one with which we began this necrology. Parents considered it a personal pleasure to have had her teach their children. The school board credited her with “harmoniously blending into her life the solid foundation and perfection of the natural virtues, the theological virtues of faith, hope and charity and the cardinal virtues of prudence, justice and fortitude”. “These,” they said, “She passed on to her students, who have gone on to expand this Christian atmosphere in the world as a result of her training.”

Sister remained active after leaving the educational scene. She lived two years at Trenton, serving as portress, visiting the sick and putting her cooking skills to use on occasion. She then had two similar years in Picton. During this period, Sister had the privilege of often being with her mother who was dying in her mid nineties. However, quite suddenly on Good Friday and again on Holy Saturday in 1972, Sister, herself, suffered strokes which left her partially paralyzed. Although with rehabilitation some movement returned, it became necessary for her to take up residence in the Marian Infirmary at the Motherhouse in Kingston. Like all infirmary occupant, her life became one of prayer, suffering and patient waiting for the Lord, while engaging in as much community activity as physical limitations allow.

In 1985 and 1986 Sister Mary Francis of Assisi was further incapacitated by another series of strokes. She began to experience great difficulty in swallowing and eventually required complete bed care. She was anointed several times in these two years and so was well-prepared for the happy release of death which came on June 3, 1986, exactly sixty years from the date of her initial letter to the Community.

Impressive in stature, firm and gentle in her ways, Sister is fondly remembered by those who lived with her on mission. One Sister remembers her as having “that indispensable gift of a fine sense of humour…she was a good-natured tease, but never to the extent of hurting anyone.” She was seen to be very particular about her religious obligations. Her deep faith led her never to hesitate when there was an opportunity to assist at an extra Mass. She performed many a kind deed.

Her own family remembers her in much the same way. “When home on a visit, she kept the Rule and stood up for her mischievous nephews.” She was very close to her family and in her years of illness was consoled by their constant efforts to keep in touch. She is survived by one sister, Kathleen (Mrs. Rodney McKenna) living at Wolfe Island, and two brothers, Hubert, of Enterprise, and Michael, whose home is in Ottawa. Kathleen affirms that “While Sister Mary Francis of Assisi exemplified the true portrait of the life of a Sister; she still remained the focal point of admiration and inspiration to her immediate and extended family. Her memory will long remain in their hearts.”

The funeral for Sister Mary Francis of Assisi was on June 6 and was concelebrated by Archbishop F.J. Spence, Monsignor J.G. Hanley, and Fathers T. Raby, J. Rozon, B. O’Neill, L Byrne, P. Hamilton and W. Steacy, CSsR. His Grace, recalling the fourteen years of Sister’s infirmity, pointed out in his homily that “suffering is a vocation by which chosen souls participate in the work of redemption…enabling us to grasp a greater perception of the meaning of God’s Kingdom in this world.” In both her active and inactive years, Sister Mary Francis of Assisi helped to build the kingdom. She now enjoys a King’s reward.