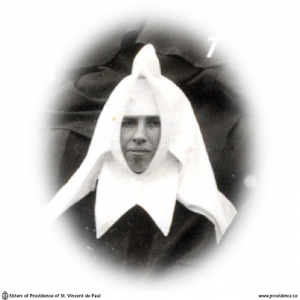 On November 27, 1934, Sister Mary Francis Clare (Genevieve Cannon) died at Toronto on her way to St. Vincent de Paul Hospital, Brockville. She died before she could be removed from the train to St. Michael’s Hospital, Toronto.

After her religious profession Sister was sent West to Moose Jaw, where she studied nursing. She spent most of her religious life here with the exception of a short stay in Edmonton and Winnipeg.

Although her time in religion was comparatively short, it seemed as if God gave Sister special graces of prayer and detachment, and that as the Scriptures say “She ran a long course in a short time.”

She had been very ill and a patient for several months at Providence Hospital, Moose Jaw. She repeatedly expressed a desire to come home to Kingston, and her coming was arranged accordingly, although she was very sick.

On the journey she was made as comfortable as possible, but seeing that she was growing gradually weaker, her traveling companion, Sister M. Aileen, encouraged her to make her preparation for death. This she did in a most edifying manner shortly before she became unconscious.

The chaplain and Sisters from St. Joseph’s Hospital kindly met the train in Toronto.  They were most generous in their assistance and saw to it that every spiritual comfort was provided.