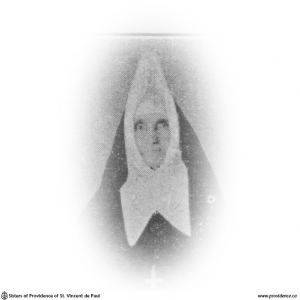 On June 12, 1924 there passed from our midst one of our number of who it can be said in truth, “She was indeed a good Religious”. So impressed was she from the beginning of her Religious life, and no doubt, long before her entrance into it, with the importance of the “One thing necessary” that it seems never for an instant to have been obliterated from her mind.

She seemed to be always recollected, never taken unawares. To accomplish every work perfectly was her chief and only aim. To those not understanding her disposition and meaning, association with her was often irksome and difficult, but after continued mingling with her in work or conversation, they were often surprised to find under her dark or gloomy aspect, a heart of gold, a sweet gentle disposition, kindness of manner with sympathy and consideration of others. This reserve or apparent coldness of manner proved often a barrier to the successful termination of her dealing with outsiders, as she herself realized.

It was only her sense of duty which caused her at any time to take the initiative, always preferring to remain in the background and let others take precedence. Her Community however, appreciated her worth and virtue. Five times she was elected to the important position of member of the Council, being for one of the terms the First Assistant of the Superior General. Never very robust, of a rather delicate frame and constitution, she nevertheless, in her early religious life, took her part in the laborious works of the House, in the kitchen, refectory, laundry, clothes room, visitor of the sick and poor, etc.

Annie Candon as she was known in the world, came to the Institute when it was but five years established and she only fifteen years of age. She was the daughter of Bartholomew and Ann Candon of Read, was born June 8, 1852. Meeting with our Sisters who went out soliciting aid for their poor, she came home with them, but after a few weeks, the trial of separation from home and kindred together with the hardships incidental to the new foundation, proved too much for her, she returned to her parents and family.

After that time she went back to school and succeeded in obtaining a certificate qualifying her to teach. She took a position in a school in the vicinity of her home and taught for a couple of years.

Retaining that longing for a conventual life, when her younger sister (now Sister Mary Benchman’s) asked and obtained her entrance into the Community, she came along with her and re-entered the Novitiate on the same day Jan. 6, 1872, four years after her first entrance. The time of absence had not been lost. She utilized it in study, and had also learned something of drawing and painting for which she had a special talent, and which she used afterwards.

As was said above the early part of her religious life was devoted simply to the works of the House, that of teaching in Ontario not yet having been taken up. But she always took a deep interest in education; her ambition was in that direction.

In July 1887 she was sent to the Mission in Holyoke to teach in the schools. Recalled in 1889 she was given charge of the Novices’ Class and also taught the orphans.

In July 1896 she was appointed Superior of St. John’s Convent, Perth, a position she held very creditable to herself and to her Community for nine years. During her regime the new convent was built, and also to her efforts it may be said the debt incurred thereby was wiped out.

In July 1905 when St. Mark’s Convent, Prescott was opened, she was appointed its First Superior. In August 1921 she was again appointed as Superior of St. John’s Convent, Perth. At the end of two years becoming very ill, she had to go to St. Francis’ Hospital, Smith Falls. While here she was prepared for death, but recovering somewhat she returned to the Mother House in October. Feeling her weak condition she asked to be relieved of her responsibility as Superior.

On March 19, 1924, her Golden Jubilee was celebrated, with that of Sister Mary Benchman’s and Sister Mary Ignatius. She was able to come to the Community room to receive the congratulations, Gifts, etc., but did not remain for the festivities. It was hoped she might get better and be around again, but as time went on, it was plainly visible that the end was not far distant. On June 2nd she again received the Last Sacraments at the hands of Rev. Father Coyle who continued after to be very kind and attentive to her. From that, on, her strength failed very rapidly. The Sisters were with her in prayer every day very frequently until the final dissolution came June 12, 1924.

A telegram was sent to our Mother General who was then in Winnipeg. She replied to on with the funeral arrangements, but to hold the remains until her arrival.

Our Mother arrived at 3 p.m. The casket remained in the Chapel until 4 p.m. Saturday June 14, 1924, when the procession was formed, and all that was mortal of our beloved Sister was transferred to St. Mary’s Cemetery. During the previous twelve days many prayers were offered.  We cannot but hope dear Sister; you can plead powerfully for us and will do so.