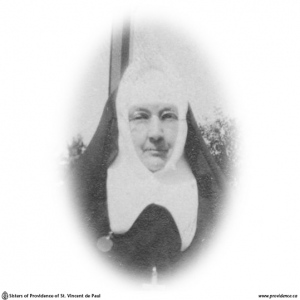 On January 21, 1936 Sister Mary Francis Regis (Elizabeth Young) passed to her eternal home at the House of Providence, Kingston.

In 1913 Sister was elected to the high office of Superior General and re-elected to the same office in 1916. Owing to the unfortunate complications for the Community during her second term of office, causing untold suffering to herself and others, in 1918 she was obliged to resign her office.

Only in eternity can it be estimated to what extent the trials she endured in those days, led her on the road to sancity. She was a prayerful, holy religious.