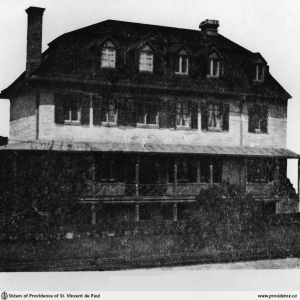 Catherine Byrne, called in religion, Sister Mary Francis Xavier was born in Wicklow County, Ireland and was one of three sisters of the Byrne family, who embraced the religious state in the House of Providence, Kingston. She entered August 3, 1867, the year after Sister Mary of the Sacred Heart made her profession. Being of a pre-possessing appearance, and a very agreeable manner, she might have attracted admiration and moved with a degree of self-gratification in society; but through the holy influence of a Christian education she was convinced that “all is vanity which passes with time” and sought eagerly to lay up her treasure where neither moth could eat nor rust consume. All the wealth of her heart’s holiest love, with these attractions of character and personal beauty which distinguished her, she sacrificed generously to the Great Donor of every good gift and entered on the religious life.

Her time of probation was not marked by any extraordinary occurrence, and at its close she was permitted to make profession in company with her Sister Ellen who entered on the same day.

She was as innocent and free from guile as a child and entered without reserve on all the exercises of piety prescribed by the rule. It cannot be said, she laboured hard, that she acted the part of Martha in the service of the Great Master; but she loved much and God seemed to delight in communicating the ineffable consolations of Divine Love to her pure soul. She cherished all the virtues, it is true, but at the mention of holy purity, her very countenance glowed with joy and she could not control her emotions of gratitude at being admitted among the followers of the lamb. She was often heard to say that in looking on the Sisters and considering them as pure and consecrated Virgins, she would fain cry out, “Lord it is good for us to be here.” In very truth she was a being too pure and chaste for long contact with this rude world. Long sufferings and heavy trials were not needed to detach her heart from earth or wash out the stains of sin, for Our Lord did this by His all-powerful grace, and while yet in the spring-time of life, this tender flower was transplanted from this ungenial soil to bloom in that fair land where sin and sorrow have no home.

Consumption laid its fell hand on her and she succumbed to the first stroke. A few short months and her cheek lost its blush, her laughing eye its brightness, slow and languid became her step, thin and wan her slender frame.

Much as the sisters feared to lose her, they could not be blinded to the fact that she would soon be with Sister Mary of the Sacred Heart, and though convinced that she had nothing to fear in meeting Him, who was not alone her judge but the well-beloved of her soul, still they grieved to part so soon; but she looked on death with calmness and bade it “Welcome.” Never did sick patient watch more jealously the symptoms of returning health that our dear Sister noted the harbingers of her last end.

She suffered no acute pain still an over-powering weakness which rapidly increased, utterly prostrated her, but a strong faith and boundless love of God sustained her until that kindly heart had ceased to beat and her peaceful soul had fled.

She died in the spring when nature was re-awakening to sing the praises of the great Creator, a fitting time for one like her to pass to that Land of Eternal Spring for which she sighed more eagerly than the weary traveler longs to visit his native hills.

All the consolations of our Holy Religion were afforded her and all who came near her were edified by the unremitting fervor she manifested and astonished at her ardent desire to die. “Oh, tell me she would say, while fastening her large and expressive eyes inquiringly upon you, tell me will I die to-night?” At length the agony commenced, the prayers for the departing soul were read, and the long desired hour seemed at hand; but rallying a little she returned to consciousness and begged the sisters who in tears were kneeling by her bedside to say the Miserere. They complied, they prayed beside her and when unable to articulate, her lips moved, her eyes upraised in earnest beseeching gaze, told that she was resigning her soul to Him who gave it.

In considering that she lived so short a time in religion one might naturally be surprised at her eagerness to shake off this mortal coil, and ask why she did not rather desire to labor longer, if only to atone for those little imperfections to which all the children of Adam are subject: but let it be remembered that “Love casteth out fear and much is forgiven to those who love much”. This must have been the cause of her resignation, certain it is that her conversations ever turned on some pious subjects, her actions were never performed to be seen by men; her affections were restrained within these limits becoming a Christian and a religious; she saw our Lord in the poor man who asked an alms of her, and relieved him with respectful tenderness.

Truly, she was favored in being called home from this vale of tears at so early an age, and we will be encouraged by the example of her fervor to support the labors of our sojourning in a spirit of love, for do we not serve the same benign and generous Master who regardeth not the works we do, but the spirit that prompts them?

May she rest in peace; may her abode be in Holy Zion, where, having found favor with the Lord, she will aid us by her prayers, until we too, having finished our earthly course, may hope to rejoin her and sing eternally the canticle of those who make the Heavens resound with their Hosannas! Amen.