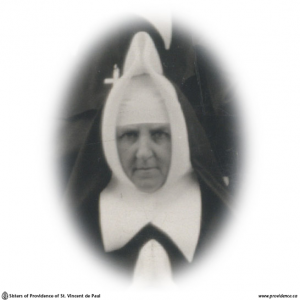 Sister’s life was devoted to teaching, for which she was admirably adapted. She had taught for two years, before entering the convent, in a school near her own home, but she aspired to higher things and she embraced the religious life.

After profession she resumed her former occupation, teaching successfully the Grade Eight classes in the Separate Schools at St. Mary’s and St. John’s, Kingston, and in the missions of Belleville, Trenton, Prescott, Chesterville, Arnprior and Perth. Gifted with a kindly, gentle disposition, she won the affection and respect of her pupils and had admirable control in the class room.

Sister had been in failing health for some time, but it was thought, that with care and rest her health would be restored. She was suddenly taken with a stroke of paralysis that proved fatal.