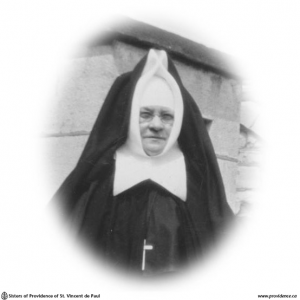 Mother Mary Gabriel passed to her eternal reward on Monday morning, December 11th, 1946 after an illness which had kept her confined to bed for more than a year.

As Mary Elizabeth Cunningham of Kingston, her native city, she entered the Novitiate at the House of Providence before that institution had reached its first quarter century mark. Its existence coincided almost with her own age.

On admission to the Community, her Superiors soon recognized her executive ability and as a professed Sister it was her destiny to become in turn, Secretary, Superior and Councillor, covering practically all the years of her religious life. On the death of Mother M. Scholastica, Mother Gabriel was elected Superior General in 1907 and filled that office until 1913. The first foundation in the West at Daysland, Alberta was made during her term in 1908. Mother Gabriel also made many other important additions and alterations, which have been of great benefit to the works of the Institute. She was responsible of introducing the Guardian Office.

She was a faithful religious, devoted to her Community and was interested in all that pertained to its advancement. She had the same motherly interest in all that concerned the different houses in the East and West alike. Even in her advanced years it was a pleasure to find in Mother M. Gabriel a ready listener with much sympathetic understanding. She found it hard to be inactive and longed to die, but although her agony was prolonged, it was a means of merit and God’s way of purifying a great and generous soul.

After so many years of faithful service in His vineyard, she died at the House of Providence, Kingston. Mother had spent sixty-five years in religion.