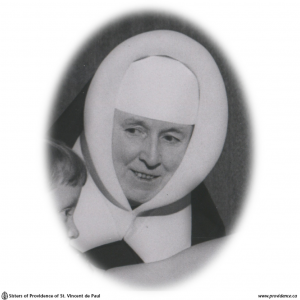 Sister Mary Genevieve (Mary Loretto Corboy) died at the House of Providence on Tuesday, August 8th after a prolonged illness.

Born and educated in Gananoque, this promising young lady, in due course felt herself drawn to religious life, and on Dec. 26th, 1915 she made her decision by writing with a request for admission to our Community. The following year, five months later, Miss Corboy was admitted as a postulant to the preparatory Novitiate then located at the House of Providence, Kingston.

Gifted with an exceptional musical talent Sister began at once what was to be her life work – teaching music and directing the Sisters’ choir. While Sister had excellent training before her entrance into religion, the Community provided opportunities for further study at the Royal Conservatory of Music in Toronto, and the Eastman School of Music in Rochester, N.Y.

Sister early displayed a special interest in church music and became a student of Gregorian Chant. The Reverend J. M. Petter, S.T.B., who was president of the St. Gregory Society of America and a student at Solesmes under Dom Andre Mocquereau, O.S.B., was a teacher par excellence, and in Sister M. Genevieve he found a pupil both talented and sensitive. Specially trained teachers from the Pius X School of Liturgical Music came each year for several years to the House of Providence to give courses in chant and polyphony. The beautiful interpretation of plain song soon filled the hearts of all who came under the direction of Sister Mary Genevieve.

She formed a boys’ choir known as Pius X Choir, and they became a regular part of all liturgical functions at St. Mary’s Cathedral. This choir sang on many other occasions and won the highest awards in competition with other schools. The influence of this inspiring teaching still remains with many of these boys; having developed a taste for correct and beautiful church music they learned the lesson that “he who sings well, prays twice.” Sister organized a “Liturgical Day.” This “day” began with a dialogue Mass in St. Mary’s Cathedral, celebrated by Right Rev. J. G. Hanley, with all the children of the city separate schools participating. In the afternoon and evening there were programs staged in the city hall with renditions of Gregorian Chant and Polyphony. Rev. J. E. Ronan, director of St. Michael’s Choristers, was a great speaker.

The Novices’ choir was one of Sister’s special delights. It is unusual for a Sister to spend such a long religious life – almost forty-six years in one house, but who could bring the sounds from our beautiful Casavant organ as could Sister M. Genevieve, and so she remained at the House of Providence, teaching music, playing the organ and directing the choir all her religious life. And even when stricken with serious illness, Sister retained her interest in her life’s work until she was no longer able to leave her sick bed.

In 1958 she was informed that she was a victim of cancer. For two years she battled valiantly against the disease, keeping up a considerable part of her teaching schedule. Then followed months of intense suffering borne with patience and cheerfulness, until just before the Community Mass on August 8th, when the chaplain had finished reciting the prayers for the dying and given her absolution, she quietly breathed her last.