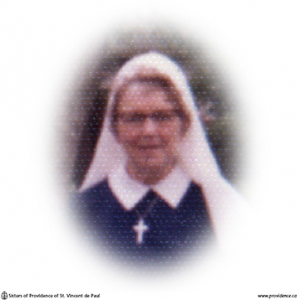 Mary Jemima was a very self-sacrificing young woman who helped her widowed mother to raise three sisters and a brother. The family moved to Montreal when, at the age of 17, she began to work at the Bank of Montreal to support the family members. She was the first female to be made a bank teller at this bank. She became an astute business woman and success attended all her undertakings, yet an inner call persisted. When her brother and sister returned from overseas after World War II, after 18 years in the banking field, she was then able to enter the religious life as she could then pass on to her brother and sister the responsibility of supporting and caring for her dear mother.

Mary Jemima’s call to the religious vocation was made evident through her love for the poor and through her special devotions to the Blessed Sacrament, the Blessed Virgin, the Sacred Heart, the Holy Souls in purgatory, and the Priesthood of Christ, which she honoured and supported in many ways by her loyal dedication and helpfulness to the Redemptorist Fathers. She entered the Sisters of Providence on March 19, 1946, and made Profession on March 19, 1948, taking the name of Sister M. Gerald Francis because of her high esteem for Rev. Gerald Koster, CSsR, and Rev. Francis Cunnerty, CSsR, who were very dear friends of hers.

Because of Sister’s expertise in finances, she held responsible positions in Providence Hospital, Moose Jaw; in St. Mary’s of the Lake Hospital, Kingston; St. Mary’s Hospital, Camrose, AB; St. Anthony’s Home, Moose Jaw; St. Joseph’s Vocational School, Winnipeg, MB; and in secretarial work at Providence Motherhouse. To prepare herself for these positions, she attended the A.H.A. institute on hospital administration and on hospital trustees, as well as Supervisor Management, Developing Management Sills and Improving Management Performance at Gordon A. Friesen (Canada) Limited Health Care Consultants. While at the Motherhouse, she also did pastoral care at Rideaucrest Home and worked with teenage volunteers from Regiopolis/Notre Dame High School.

Wile at St. Mary’s of the Lake, Sister, always a woman of vision, planted an extensive garden in the unused land left vacant when the army barracks were removed. Sister must be credited, also, for the two avenues of trees along the approach to the Hospital from King Street: a truly beautiful driveway.

In later years, with continuing vibrant love of life, Sister visited the sick and the aged, spent many hours in prayer (was the Pray-er for Alfred Street House); and to relax, she read, knitted and crocheted. Before retiring at night, no matter how tired she was, because of her great devotion to the sick, she would go to pray briefly with them, and when needed, generously took her turn with those nearing death.

Sister Catherine Rose Myers and Sister M. Gerald Francis died the same morning, June 15, 1991, and a very impressive double funeral was held on Monday, June 17, with Bishop F.J. Spence, assisted by several priests, presided. Nephews of the deceased were pallbearers and a nephew gave the second reading. Sister M. Gerald Francis’ brother, William and his wife Patricia and family, and her sister, Olive, were present for the wake and funeral.