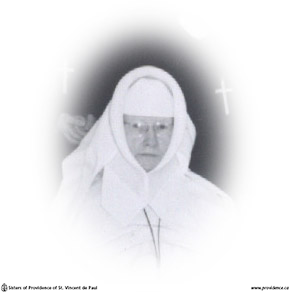 Katherine Murphy, daughter of Martin Murphy and Mary Hyland, was born in Stirling, Ontario, on October 13, 1884, one of a family of seven. On December 8, 1912, she entered the Novitiate at the House of Providence just a few months after her sister Mary had made profession as Sister Mary Felix. Katherine, or as she was known in the family circle Cassie, received the Holy Habit on January 15, 1914, and in the following year on January 21 pronounced her First Vows and took the name, Sister Mary Gerald.

Very soon after profession she was sent to Providence Hospital, Moose Jaw, and was trained as a Laboratory Technologist. When St. Mary’s Hospital was opened in Camrose, Alberta in 1924, she was one of the foundresses, and for thirty-seven years she had charge of the Laboratory there. When age and failing heart obliged her to relinquish her duties in that department, she remained on at St. Mary’s for five years as sacristan. In 1965 she celebrated there the Golden Jubilee of her religious profession. The following year she retired to the infirmary at the Motherhouse.

During the next two years she suffered frequent heart attacks, but as each one passed she was around again, going to the chapel for Mass and never complaining, either of physical discomfort or loneliness. Yet we knew she was enduring both. One who was so white and frail could not but suffer from weakness; and it was but natural that she should miss the atmosphere of St. Mary’s and the companionship of the Sisters with home she had been associated so long. All these Sisters, and especially the younger ones (there was no generation gap) showed their appreciation of her friendship by the letters they wrote her, and the fidelity with which they visited her whenever they came to the Motherhouse.

The Sunday before Christmas, 1968, she had a severe attack, and a priest was summoned at 6.45 a.m. to anoint her. It was believed she could not live an hour, and Mother Assistant remained with her during the Community Mass, which was offered for her. For a couple of days Sisters watched with her day and night, but once again she rallied, and although very weak she lived and was conscious for another six weeks. For her last four or five days she was practically in her agony, but to all appearances no suffering. Her death, like her life, quiet and peaceful, came at 3 p.m. February 17, 1969, while Our Mother General (M. Lenore Carter), Mother Carthagh, Sister M. Alban, the infirmarian, and several Sisters were praying at her bedside, and the chaplain, Father Buckley, had just given her the absolution.

The Sisters who lived with Sister Mary Gerald remember her as a woman who exemplified the virtues of humility, prudence, and a spirit of prayer; as one devoted to her duties, spiritual and temporal; one who never wasted a moment and was always ready to help. She possessed a quiet sense of humour, and her witty, but kindly remarks, often coming at most unexpected moments, made her a general favorite.

Sister was the last of a family of seven.  Sister Mary Felix died in 1957. Three brothers, none of whom married, divided all their worldly goods, considerable in value, between the Archdiocese and the Sisters of Providence. But Sister Mary Gerald never made any reference to the donations of her wealthy and charitable brothers.

Her funeral was on Ash Wednesday, February 19, the first in our new chapel. His Grace, Archbishop Wilhelm offered the Mass assisted by the chaplain, Father Buckley.