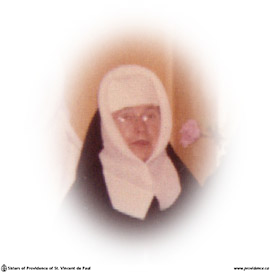 On September 7, 1971, death claimed one of our veteran members, Sister Mary Geraldine, in the 88th year of her age and the 68th of her religious life.

Margaret Anne Egan was born November 8, 1883, in the village of Westport and baptized five days later in the parish church of St. Edward’s by Reverend M. Stanton. Her parents, James Egan and Maria Bennett of Irish immigrant stock, founded a family described by their pastor as good practical Catholics held in high regard in the community. Of their four daughters two were called by God to religious life. In 1904 Margaret entered the novitiate of the Sisters of Providence and was granted the gift of a long and active life. Isabella who joined her sister in 1911 only seven years in the convent having fallen a victim to the 1918 epidemic of influenza.

When Margaret made profession as Sister Mary Geraldine, she was sent to train in St. Vincent de Paul School of Nursing, graduating in 1908. She remained on the staff of St. Vincent’s for seventeen years. The next thirty-nine years she spent in the different hospitals of the West, and served as well as Local Superior at St. Joseph’s Vocational School, Winnipeg; St. Mary’s Hospital, Camrose; Rosary Hall, Edmonton; and St. Anthony’s Home, Moose Jaw.

In 1964 she retired to the Marian Infirmary and for seven years was a patient cheerful sufferer, gradually losing hold on life. Three days before her death the doctor told us the end was near. On August 18th she received the Last Rites, on the evening of the 6th His Grace the Archbishop visited her and gave her his blessing, and Sister Mary Ivan volunteered to keep the night vigil with her. At midnight Sister Mary Adalbert joined Sister M. Ivan and while these two sisters with the night nurse, Sister Helen Killeen, prayed at her bedside, Sister Mary Geraldine quietly breathed her last.

The funeral Mass was celebrated on September 9th by His Grace Archbishop Wilhelm assisted by our chaplain Father Buckley.

No immediate members of Sister’s family survive. A niece, Mrs. John Payne, and a nephew, Mr. James McCann, reside in Kingston, and another niece, Mrs. Nicholas McNamee, lives in Perth.

Sister Mary Geraldine will be remembered for her quiet courteous manner, her almost meticulous efficiency as a nurse and her kindness and devotedness to the sick.