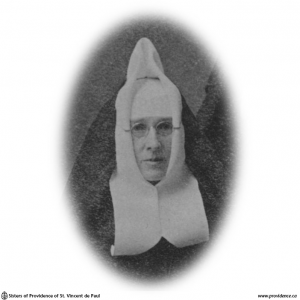 Sister Mary Gerard, Ellen Traynor, died at the Marian Infirmary, Heathfield, Wednesday, September 4th, 1957. Born in Carlton Place, Sister entered the Novitiate at the House of Providence, Kingston, in January 1904, the third of her family to accept a vocation to religious life in our Community. Her sisters, Sister Mary Liguori, a primary teacher, and Sister M. Beatrice, a nurse, predeceased her in 1937 and 1941 respectively.

Sister Mary Gerard’s religious life was devoted to the teaching of music. Though in failing health for many years because of a heart disorder, she continued her class work until three months ago; and she was preparing to go to Mass that morning when she suffered the attack which proved fatal. Realizing that it was the final warning she asked the Sisters to commence the prayers. The doctor was called and after prescribing for her said to assure Sister there was no cause for alarm, she had similar attacks before. Although she had been anointed the week before, the priest was then notified and Father Brady came immediately, but before he could get here, in about ten minutes from he was summoned, Sister had passed peacefully away surrounded by her Sisters in prayer, to join her two devoted Sisters in their eternal home.

Sister was well known in Prescott which was her first mission in 1906, where she was local Superior for six years, six years in Picton as local Superior and music teacher, and several years teaching music in Trenton, Arnprior, and Chesterville where she also served as Local Superior. In October 1956, she celebrated the Golden Jubilee of her religious profession.

The funeral was held from our Mother House Chapel, Heathfield, on Friday, Sept. 6th.  His Grace Archbishop O’Sullivan offered Pontifical Mass, assisted by Msgr. Sullivan and priests from St. Mary’s Cathedral. The prayers at the grave were recited by Rev. Father Keyes with Frs. Brady and Murphy assisting.

The only surviving relatives are a sister-in-law, Mrs. Joseph Traynor and several nieces and nephews in Sault Ste. Marie, Ontario.