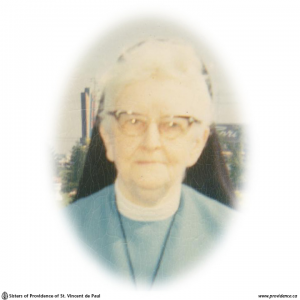 Too few women are granted the privilege of spending seventy-one years in the service of God in religious life. But when Sister Mary Germaine died on June 28, 1975, she had lived three months of her seventy-second year as a Sister of Providence of St. Vincent de Paul.

The former Mary Joanna Ryan was born in Westport, Ontario on Mayay 29, 1882, the daughter of James Ryan and Mary Anne Donoghue. When she was a very young child her mother died and she was brought up by her mother’s brother, Jeremiah Donoghue, and his wife Kate. In a home and parish of strong Irish Catholic faith it was not surprising that the seed of a religious vocation, planted by the Holy Spirit, should be fostered and developed. And so on March 25, 1904, Mary Joanna, still not quite 22 years of age, entered the novitiate of the Sisters of Providence, Kingston. Two years later as Sister Mary Germaine she was ready to begin a long life of active service as a Sister of Providence.

As she had shown interest in and some talent for music, her Uncle Jerry had bought her a piano and given her a start in musical education. The Community continued this training and Sister had soon obtained qualifications as a music teacher. Along with her classes in piano she also directed the choirs in the parishes where she taught, and in Gananoque, where she spent seven years, she coached a string band.

Always going where obedience assigned her she served in the parishes of Prescott, Arnprior, Trenton, Tweed, Gananoque, Chesterville and Apple Hill. In the two last named parishes she was given in addition to her teaching duties those of Local Superior of the convents. Her longest term of service was in St. Michael’s, Belleville where she spent twenty-one years.

In 1966, at the age of eighty-four she retired to the Infirmary at Heathfield. Though frail in appearance she had a strong constitution and during her nine years in retirement she kept active and she survived an operation for cataracts which left her with perfect vision, a couple of severe attacks of flu and major abdominal surgery. The year before her death she was able to attend the funeral of her nephew Monsignor Ryan of Hamilton.

But even the strongest constitution weakens with advanced age. And so it was with Sister Mary Germaine. A couple of times she suffered weak spells, and on June 24th she fell and fractured her hip. Although she came through the surgery required, strength did not return and after four days in hospital she slipped quietly away. Sister Loretto Buchanan, a friend of many years, was with her at the end.

Sister will be remembered for her efficiency as a music teacher and her enthusiasm and generosity in helping her pupils, whether young religious of the Community, little school children or adults, who showed signs of musical talent, but who perhaps without her encouragement would not have developed that talent. She will be remembered best, however, as a loyal number of the Sisters of Providence.