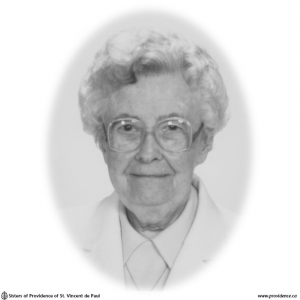 Mary Monica Tims was born in Pakenham Township, Ontario on December 25, 1904.  She was the only girl in a family of four children. Her parents were Michael Tims and Mary Farrell. Monica received her early education at S.S. # 5 Scotts School, Pakenham and finished her high school in Arnprior.

On August 29, 1931, Mary Monica Tims made her first profession of vows, taking the name of Sister Mary Gervase. After profession she was missioned to St. Mary’s of the Lake to take care of children from ages one to five. After two years she was transferred to St. Francis General Hospital in Smith Falls for general nursing. A short time later she traveled to Camrose, Alberta where she was in charge of the medical and surgical wards on the first and second floors of St. Mary’s Hospital.

In 1943, when the congregation sent Sisters to staff St. Mary’s Hospital in Montreal, P.Q, Sister Gervase joined the group, where she remained for eight years. It was in Montreal that she trained as an x-ray technician. In 1951 the board of directors expressed their deep regret upon learning that Sister Mary Gervase would be leaving the hospital. During the time that she worked as chief technician in the x-ray department her untiring efforts made St. Mary’s x-ray department a very pleasant place. It was said that she made every patient her own personal affair which is the type of service the directors felt was desired at St. Mary’s. In the administrator’s letter of gratitude he expressed his personal regret and the impossibility of replacing an unselfish person such as Sister Mary Gervase.

Subsequently, Sister found herself on her way back to Camrose, AB. She was missioned to St. Mary’s Hospital, Camrose from 1951 to 1985 where she served as charge nurse of the medical and surgical units, as x-ray technician, and as purchasing agent. During those thirty years she also assisted in the departments of pharmacy, respiratory and laboratory. Following her retirement in 1981, Sister remained in residence and established the archives of the hospital. She continued to serve as a volunteer on the auxiliary, was hostess to visitors, visited the sick and telephoned many shut-ins on a regular basis. Sister Mary Gervase was always a very conscientious and dedicated person in all the positions she held and the many duties she performed.

Sister Mary Gervase was not only held in the highest esteem by her Sister companions and lay colleagues, but she was dearly loved by the many people whose lives she touched with her gentle compassion and warm delightful sense of humour. Her deep faith and daily intercession in prayer helped to endear her to all staff, Sisters, board members, doctors, patients, volunteers and friends.

It must have been very difficult for Sister Mary Gervase to leave Camrose when she returned to the Motherhouse in 1985 to retire from active duty. No doubt, it would have been equally difficult for her Western friends to say goodbye to one whom they described as a rare and beautiful person. Many expressed gratitude and feted Sister before she left. Appreciation was expressed by the parish of St. Francis at a tea.

The governing board and staff of St. Mary’s Hospital had a special farewell afternoon, the doctors, former hospital staff, the auxiliary members and a host of friends had a variety of teas and dinners in Sister’s honour. Sister Mary Gervase was an example to all in the gracious way she accepted and grew through changes in her life. She herself said that she quickly found happiness and companionship wherever she went. She entered into many activities at the Motherhouse as long as she was able and it was not long before she endeared herself in the East again as she had done in the West. She enjoyed a good game of cards and her friends say that she enjoyed a good joke even laughing until the tears ran down her face. Sister loved to spend time at the cottage on Howe Island. Her gentle presence was a gift to all who knew her. Though Sister settled in so well at the Motherhouse she never forgot her Camrose friends and managed to keep in touch with many of them through the years. She also kept all the other Camrose Sisters informed of Camrose personnel and events. Assigned as pray-er for St. Mary’s Hospital Sister often received distress calls from Sisters and lay executive directors.

Sister Mary Gervase died on June 21, 1995, in Hotel Dieu Hospital in the 66th year of her religious life. She was the last surviving member of her immediate family. At the vigil service, Sisters, relatives, and friends paid tribute to Sister’s caring, loving kindness, joyfulness, compassion, and graciousness. Also mentioned was the importance of her apostolate of prayer and her efforts to keep in touch with her many friends by telephone.

Archbishop Francis J. Spence presided at the Funeral Liturgy in the Chapel of Mary, Mother of Compassion, Providence Motherhouse, on June 23 and delivered the homily. Many of Sister’s cousins joined in the celebration of Sister M. Gervase’s life.