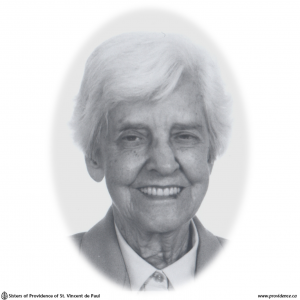 The life of Sister Mary Giroux (Lalonde), of the Sisters of Providence of St. Vincent de Paul, Kingston, could read like a high powered work of fiction. She indeed had a rich and varied life. Born in North Bay in 1911, Mary Josephine Lalonde was the eldest of ten children to bless the home of Fred Lalonde and Susan (McKee). As a youngster, Mary put on plays and organized bands to march up and down the streets of Sudbury. She would dress up in old fashioned clothes and tell kids hair-raising stories. No one knew quite what to make of her fertile imagination. On one occasion a bank robber who was being chased by police ran upstairs over a restaurant. Seeing him, Mary went in hot chase up the stairs only to meet the bandit coming back down, fortunately between two policemen. Like a news hound she stayed on the scent and looked around the bloodstained room for the bank loot which was later found to the tune of fifteen hundred dollars under the floor boards.

A deeply spirited person even as a child Mary hoped to follow in the footsteps of her two  sisters, Fredrica and Alice, who entered religious life in the Congregation of the Sisters of St. Joseph in North Bay, but for some time felt her presence was needed at home. She graduated from Queen’s University in 1935 and returned to the north as quickly as possible. From then on Mary’s time was divided between being a teacher and a newspaper reporter. How she found time to cover so much ground, both physically and mentally was a mystery to her colleagues. After a short time on the staff of the Sudbury Star, Mary took on a job which many reporters wait all their lives to realize, that of a columnist. She was the author of the Star’s “Mainly for Women” column. Perhaps the biggest “scoop” Mary handles was the coverage of the visit of the King and Queen to Sudbury. As a teacher Mary’s speciality was art, which she taught in addition to her regular subjects.

In 1941 she married Romeo Giroux and had two children, all of whom sadly, predeceased her. Besides raising a family, teaching and working as a reporter, Mary worked for the Department of Mines and Resources in Ottawa and while holding this respectable post travelled extensively across Canada and abroad. Those who worked in her company remember her as standing out as a person. Perhaps it was her great love for God which set her apart even then.

In 1982, at age of seventy, Mary, always a woman of contemplative prayer, finally sought to fulfill her desire to enter religious life. She applied to the congregation of the Sisters of Providence, because she admired the way the Sisters “quietly went about getting good things done.” She felt she needed the support of a community to deepen her own commitment to God’s call. It was unusual to enter at the age of seventy but since her health was good and she had such a sincere desire to give the rest of her life to the mission of Jesus, she was accepted into the novitiate on August 1, 1982. For six months prior Mary volunteered at the Day Care Centre at Providence Manor where her kindness and compassion towards the residents was noticed by all. Mary was always generous in sharing her goods and her gifts with others, both before and after she joined the congregation. For some time while living in Stanleyville Mary attended daily mass in Perth. On many occasions the Sisters were welcomed at Mary’s home and treated to her excellent cooking. She even entrusted them with a key so they could use her home anytime they wanted to swim, of in winter ski, on Pike Lake. Mary was responsible for organizing the Legion of Mary in St. John’s parish, Perth.

Until ill heath confined her to Motherhouse Infirmary, Mary was the head of Pastoral Care Services at St. Anthony’s Home Moose Jaw SK. During this time while living at such a distance from her family, Mary missed them all very much, especially her young grandchildren.

It was painful for Sister Mary and to her loved ones, to discover that as her physical health weakened she also began to suffer from Alzheimer’s disease. A woman of deep prayer to the end, Mary was called home to her loving God on August 11, 2000

Sister Mary is predeceased by her parents, her husband, Frederic, her children, Catherine and Ron, her brother Donald and her sisters Anne Isobel (Blais), Catherine, Fredrica C.S.J and Alice C.S.J. She is survived by sisters Margaret (MacGregor) of North Bay, Thersa (Zernec) of Florida, by brothers Frederic of Elliot Lake, David of Timmons and Laughlin of Orleans, ON. She will also be sadly missed by her grandchildren, John, Max, David, Mikaela, Michael, Steven and Mark, by other members of her family who travelled from great distances to be present at the celebration of her full life, as well as by members of her religious community.

The Mass of Christian Burial held in the Chapel of Mary Mother of Compassion, Providence Motherhouse on Monday, August 14 was presided over by Archbishop F.J. Spence, accompanied by several of the members of the local clergy. In his homily, Father David Hale remarked that Sister Mary, like Jesus, poured out her life for others. In sorrows and challenges she maintained hope and faith to embrace all that life held for her. May she rest in peace.