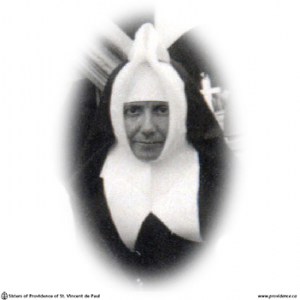 Sister Mary Gonzaga died in the Marian Infirmary, Heathfield, on May 22, 1966, after an illness of several months. Although at the time of her death she was in her eighty-fourth year, she had been retired from teaching only six years, and for only three of these years was she inactive in the infirmary.

Mary Veronica Burke, as Sister Mary Gonzaga was known in the world, was born in the parish of Cantley, Wright County, Quebec, then in the archdiocese of Ottawa. Her parents, David Burke and Ellen Barrett, had the consolation of seeing three of their nine children favoured with vocations to the religious life. Two girls joined the Grey Nuns of Ottawa, and Veronica also entered the novitiate of that community, but was obliged by ill-health to leave before her term as postulant was completed. Her health restored, she spent a few years in teaching and office work, but her desire to consecrate herself to God in religious life never weakened. The Superior General of the Grey Nuns, Mother Duhamel, in her letter to our Superior General, Mother Gabriel, attested that Veronica gave every evidence of possessing a model of piety and obedience, and their administration would willingly have granted her entry a second time had she asked for it. Veronica, however, chose to apply to the Sisters of Providence and was admitted to the novitiate at the House of Providence in 1913.

After profession she spent a year at Maryvale Abbey, Glen Nevis, completing requirements for admission to an Ontario Teachers’ College, then a year at Ottawa Teachers’ College before entering on a teaching apostolate that lasted forty-three years. She taught in the schools at Arnprior, Trenton, Smiths Falls, Brockville and Belleville.  During these years she continued her studies to obtain Grade XIII standing and a First Class Teaching Certificate. She also developed her talent for music and was granted a certificate as Supervisor of Vocal Music in the schools.

On retiring in 1960 from St. Michael’s Academy, Belleville where she had taught for sixteen years, she spent a year performing light duties at St. Mark’s Convent, Prescott, a year at Providence Hall, Belleville, and a year at St. Joseph’s Vocational School, Winnipeg. When she was no longer able for even these duties, she asked if she might remain at the House of Providence where she had spent her years as novice. But after some months her health required infirmary care and she came to Heathfield. A victim of cerebral arterico-sclerosis, she had not full use of her mental faculties but she was able on the eve of her death to hold the rosary and follow the prayers for the dying recited by Mother Mary Lenore, Superior General, and several of the Sisters.

The qualities for which Sister Mary Gonzaga is remembered by the Sisters with whom she lived are her common-sense piety, spirit of prayer, regular observance, spirit of poverty and respect for authority.