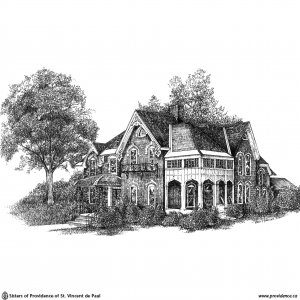 Elizabeth Mary Hourigan, the subject of this sketch, was born in the vicinity of Smith’s fall on April 26th, 1877. Her father, Patrick Hourigan, was a prosperous farmer, but not any of his three sons showing an inclination for agricultural pursuits, he sold his farm and purchasing a residence, spent the declining years of his life in the town of Smiths Falls. Here Minnie, as she was familiarly known, grew up with her three sisters, a comfort and a joy to her family and to those with whom she came in contact, by her sweet amiable disposition and her refined and engaging manner.

She finished her education at the Grey Nuns’ Convent, Rideau Street, Ottawa, and showing a special talent for music, was permitted to devote much of her time to its study and practice, not as she said after, that she thought of making any direct use of it, but simply because of the natural taste or attraction she felt for that branch.

Returning to the bosom of her family, she endeavored by her kindness and gentleness to make some return to her dear parents for the sacrifices they had made in her regard. But now there is something wanting to her happiness; there is a void in her heart not fully satisfied, a longing for the silence and solitude of which she had had a little foretaste, especially when permitted to spend a quiet hour in the convent chapel.

Circumstances caused her to forget or put aside her reflections for a time. She was asked by the reverend pastor of the Church of the Holy Cross, Kemptville, to take charge of his choir and act as organist. She consented to render some assistance, but only for a short time. On her return home, she was pressed by her pastor, Rev. Father Kelly, to assume a similar charge in her own church. To this she acquiesced, but not without reluctance, as she naturally shrank from the publicity, which the necessary duties in connection therewith, would entail. However, she continued to fill this position until she finally made up her mind that her duty lay elsewhere – that God was calling her to come aside from the world and devote her life directly to His service.  Her resolution was taken. She sought for and obtained her entrance into our Novitiate February 9th, 1909.

Never accustomed to any strenuous labor, her mother being a comparatively young woman and her two sisters older than herself, she now devoted herself with alacrity to all that was required of her in the different offices of the house, giving general satisfaction everywhere, and manifesting to the aged poor and the orphans the same kindness of manner and amiableness of disposition which was characteristic of her from her youth. She received the Holy Habit on January 3rd, 1910, and a year later, January 4th, 1911, made her Religious Profession for the term of two years. From that until the summer vacation much of her time was given to reviewing her music. At the opening of the schools in September, she was sent to the mission of Arnprior, there to take charge of the music class formed the year previous and to assist in the teaching of singing in the different grades of the school. This was to be her life work and to it she devoted herself with all the ardor of which she was capable. When not immediately engaged in giving a lesson, she was either practicing something she was about to teach, or studying some work on theory or methods, or more often, in prayer in the chapel pleading for grace and strength to be enabled to fulfill her duties more perfectly. Once, she remarked that she had learned more during her first year of teaching, than she had acquired during the whole time of previous instruction. With her pupils, she was all patience and gentleness, yet, she ever preserved that dignity of manner which entitled her to their respect. At the Rev. Pastor’s request, she frequently prepared the pupils to take part in public entertainments for the benefit of his church and won from him many encomiums for her prudent and successful management.

Gifted with a childlike simplicity of manner, she took part and very much enjoyed innocent recreation with her Sisters, always carefully shunning everything that might give offence, or be a cause of disedification. As portress of the convent and charged with ringing the bell, she was most exact, never allowing human respect to deter her from fulfilling her duty.

She passed through a severe interior trial before making her final vows in January, 1913. She became very unsettled, almost even doubting her call to the religious life, but after a few days of her retreat, she saw it was but an illusion – her fears vanishing, she recovered her former tranquility of soul.

Though possessed of a delicate constitution, she was never ill so as to be prevented from attending her religious and other duties. But in the beginning of the year 1914, she had a severe attack of sickness, and the doctor being called, found that she was suffering from serious heart trouble and advised that she make the preparations she considered necessary, as her condition was such that she might be taken off hurriedly at any time. Accordingly the Last Sacraments were administered, after which she daily grew better, and in a few weeks was able to take up her work again. The Superior General, visiting the mission a short time after, called upon the doctor and learned from him that her recovery was only temporary and that eventually she would succumb to the disease. He rather favored that she would be given a change of residence and complete rest, but it was considered that this would not be agreeable to her and that perhaps she would give up courage, if taken from her present employment. It was thought better to allow her to remain at the mission and send another music teacher as assistant. This gave her more free time and she continued about from day to day aiding with the work and resting at intervals.

On Saturday, June 18th, of the same year, she had a second heart attack similar to the first, but not so bad. The doctor was called, but did not consider there was any cause at present for alarm. On the following Thursday, while the Sisters were taking their breakfast, one Sister brought a cup of coffee to her bedside. She rose to take it and immediately sank back, as if in a faint. The Sister called her companions, but ere they reached her, her spirit had fled. Imagine the surprise and grief of the poor Sisters, for though they had some warning, still they did not anticipate such a hasty departure.

Notice was immediately given to the pastor, Rev. Father Chaine, who had a few moments before left the convent after saying Mass. He came, and though late to administer the Last Sacraments, he gave his blessing and knelt in prayer, showing much sorrow and regret for the loss of one whom he esteemed very highly.

The next day being the Feast of the Sacred Heart, he asked that the remains be not transferred to Kingston until they were first brought to the church for Solemn Requiem Mass, at which he officiated, the greater number of the congregation and all the children receiving Holy Communion. This was a great favor as, no doubt, in union with the Holy Sacrifice of the Mass, she had the offering of those pure young hearts for the repose of her soul. Many cards and other spiritual offerings were placed on her casket by the children and their parents as a testimony of the love and esteem they bore her.

The Superior and one of the Sisters accompanied the remains, arriving at Kingston about 4 p.m. They were joined at Smith’s fall by Sister’s mother and brother. The casket was opened in the reception room and great sorrow was manifested at this return of one whom they loved and also sympathy for the Superior in her loss.

Her funeral took place next morning, the 20th of June, the eve of the Feast of her Holy Patron. His Grace Most Rev. J. Spratt officiating at Pontifical High Mass of Requiem for the repose of her soul, assisted by Rev. A.J. Hanley. Rev. R.J. Halligan and Rev. J.E. McNeill, after which all that was mortal of our dear Sister was laid to rest in St. Mary’s Cemetery.

A long life was not granted you dear Sister, but we have confidence that you accomplished great things in a short space! We entreat you, therefore, to intercede and obtain for us that uprightness and purity of intention that appeared to characterize your every action.