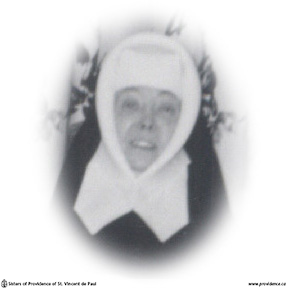 Sister Mary Grace, Elizabeth Rosalia Canning, died at the Marian Infirmary of the Motherhouse, “Heathfield”, on July 27, 1977. She was the last of our Sisters to enter the Novitiate from the diocese of Boston, Massachusetts, where our Community in 1873 established at Holyoke its first mission from Kingston.

Born in Lowell, Mass., March 3, 1891, daughter of Martin Canning and Georgiana Viau, Elizabeth, at a tender age came to know our Sisters. Her father’s sister, Sister Mary Rosalia, had entered our Community in 1888 while Holyoke still belonged to the Kingston Motherhouse. When the mission became an autonomous community in 1892, Sister Mary Rosalia’s father, at the suggestion of Holyoke authorities, traveled to Kingston to bring his daughter back to her native diocese. But Sister Mary Rosalia refused to leave the Institute in which she had made profession two years previously, and in which she died after fifty-seven years of religious life.

Elizabeth’s father was killed in an accident while his children were still quite young, and her mother was left to bring up five little girls. Elizabeth, the eldest, was her mother’s right hand and later her nurse during her declining years until her death in 1915. The faithful elder daughter remained at home for four more years to keep a home for her sisters. Then on August 15, 1919, she felt free to answer the call she had heard form her early youth, and joined her aunt, Sister M. Rosalie, at the House of Providence.

On August 31, 1921, she made profession as Sister Mary Grace, and for forty-four years served in different houses of the Community, looking after the needs of the sick or aged in Edmonton, Moose Jaw, Winnipeg, Montreal, and Providence Manor, or acting as Mistress of Boarders at Maryvale Abbey, Glen Nevis.

Never of a robust constitution, she suffered much from arthritis, and twice in her later years she fell, fracturing first a hip and then a shoulder. In 1965 she retired to the Marian Infirmary, where she was able, until a short time before her death, to assist at daily Mass.

In the spring of 1977 the doctor discovered that cancer had spread to the lung from the colon and Sister could not live many months. Her family was notified of her weak condition and in June her sister, Zita Vill, with husband, Charles, made the long motor trip from Tom’s River, New Jersey, to visit her.

The three enjoyed their visit, but the parting was painful, for during this time, the doctor told Zita, her husband, and told Sister M. Grace herself, the nature of her illness and explained why it was impossible to give any treatment. Each one of the three knew they would not meet again in this world.

Sister went down rapidly but with calmness and resignation. She was frequently racked by spells of coughing but otherwise did not complain of suffering.

From July 24th-30th the delegates for the General Chapter were assembled for retreat and so many extra prayers were being offered daily for Sister. These prayers no doubt helped her to remain patient and to make an immediate preparation for death.

On July 27th, Sister Mary Alban was in continual attendance, and Sister Mary Viola. The nurse in charge of the floor, Sister M. Electa, and four lay nurses were at her bedside at 2:30 p.m. while she quickly breathed her last.

The funeral Mass on July 29th was offered by His Grace Archbishop Wilhelm, with Father Buckley, chaplain, and Father A. MacDougall, S.J., retreat director, in the sanctuary. The honorary pallbearers were Sister M. Carthagh and Sister M. Electa – two of the three surviving members of the 1921 profession class – Sister Joan of Arc and Sister Marian McCallum.

Sister M. Grace will be remembered for her efficient care of the sick, her untiring industry, and above all for her prayer-filled life and faithful observance of her obligations as a Sister of Providence of St. Vincent de Paul.