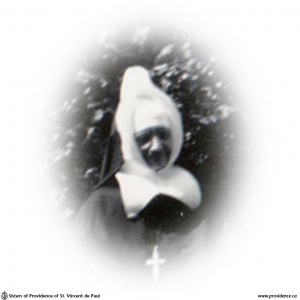 Sister Mary Gregory died at the House of Providence, Kingston, on New Year’s Eve, Dec. 31, 1952, after a prolonged illness.

Margaret Cecilia Kennedy, as she was known, was born in Huntley, Ontario. She entered the Novitiate at the House of Providence, February 9, 1909.

Having spent some time at St. Mary’s of the Lake after the Novitiate was moved there in 1910, Sister was sent west. She spent some years at the Hospitals in Moose Jaw and Daysland, as organist, sacristan, and in charge of the Chaplain’s quarters. When she returned east, she was assigned to Brockville, was for a short time at Glen Nevis, spent a year at St. Gregory’s Convent, Picton when the house was first opened, and finally she was appointed to Arnprior. She assisted the church as organist and sacristan. Here in 1948 while working in the church she became suddenly ill one morning and had to be removed to St. Francis Hospital, Smiths Falls, suffering from a stroke. After several weeks in the hospital she was taken home to Kingston, but never regained her health again and was bedridden in the House of Providence Infirmary until her death.

During her long trying illness, Sister M. Gregory was a model of uncomplaining patience and endurance.  She was never a fault-finder, and it was characteristic of her to always find an excuse for everything and everybody to her last moments. Shortly before the end, Father B. Farrell visited her, recited the prayers for the dying and gave her the last absolution. She had a very peaceful holy death.

Monsignor Byrne, in the absence of His Grace, sang the funeral Mass, assisted by Fathers Rowell and Gelenick, and in the sanctuary, Frs. Farrell and Driscoll, S.J. Burial took place in St. Mary’s cemetery. Msgr. Byrne recited the prayers at the graveside.

Surviving relatives are two sisters, one in Vancouver and one in Regina. Four brothers predeceased her and one sister – Sister M. Paulinus of the Halifax Sisters.