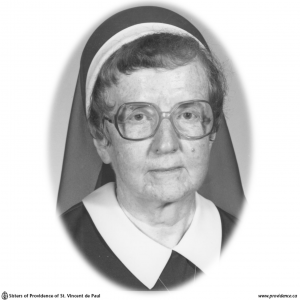 Sister Mary Hagan, suffered a stroke on March 4, 1999. After a brief time in Kingston General Hospital, she returned to Providence Motherhouse where she died peacefully on March 22, 1999.

Mary, the daughter of an Irish immigrant family, was born in Westport on January 12, 1911. Her family name was O’Hagan but the ‘O’ was dropped when the family moved to Canada in 1832. Mary was the eighth member of a family of nine, seven boys and two girls, born to Hugh and Agnes (Bennett). Mary enjoyed a happy childhood and grew into her teen-age years enjoying sports, dancing and travel. Her father died of leukemia when Mary was fifteen, and two years later, her sister Emma died of tuberculosis. Through this time of pain and sorrow Mary remembered that her dear mother was a pillar of deep faith, hope and love. In spite of great difficulties, Mrs. Hagan encouraged her seven sons and her daughter to carry on in life and to pursue their chosen careers.

As the only girl, Mary often found herself ironing seven shirts for her older brothers before they went to the country dances. She, in later years, remarked that she know she did not want to iron shirts all her life and perhaps that was what made her think of becoming a nun. Mary entered the Congregation of the Sisters of Providence of St. Vincent de Paul in 1932. When Mary took her first vows she was given the name of Sister Mary Lalemant, but later returned to her baptismal and family name.

After her first Profession, Sister trained to become a nurse and graduated in 1938 from St. Vincent de Paul Hospital, Brockville. Most of her active service was as administrator of St. Mary’s of the Lake Hospital, Kingston.

After her retirement in 1976, Sister Mary spent a year at St. Paul’s University in Ottawa training to become a pastoral care visitor. She was posted to St. Mary’s Hospital, Camrose, Alberta, to the Pastoral Care Department, and then on to serve at St. Anthony’s Home in Moose Jaw, Saskatchewan as administrator and coordinator of pastoral care.

In 1982 Mary was appointed director of Gabriel Home, a facility which ministers to unwed mothers and their babies. She found this to be a very rewarding experience, but in 1986 was forced to resign because of poor health.

In spit of her failing health, which forced Mary to retire to live at the Motherhouse, she still remained quite active, continuing to visit the patients at Kingston Psychiatric Hospital once a week. She also helped to operate the Motherhouse switchboard right up to the time of her stoke. For many years Mary quietly supported the Salesian Fathers, and other missionaries. She wrote regularly to Sister Una Byrne who, working in the Canadian north, appreciated hearing news from home. In the summer of 1998, Mary was able to attend ka large family reunion and jubilee celebration for her brother, Brother Francis CSB, who subsequently died shortly before Christmas of that year. Sister said she would like to go to heaven soon after Francis. It seems that God answered her prayer, for she died only a few months after her brother’s death.

In her autobiography Mary wrote that her heart was full of gratitude to God for many graces and blessings, and to her congregation for providing her with every spiritual and material advantage over so many years. With the Blessed Virgin Mary, whom she referred to as her ‘Dear Mother’, she proclaimed, “The Almighty has done great things for me and Holy is God’s name.

The Mass of Christian Burial was celebrated on Friday, March 26, 1999 by Msgr. T. Raby, assisted by several other members of the local clergy. The homily was preached by Father Brian McNally, who remarked that, in death, Sister Mary will continue to be a channel of grace and love to all those whose lives she touched while she was physically present among us. All the members of Mary’s immediate family preceded her into heaven, but many of her nieces and nephews, as well as many friends and longtime coworkers joined the members of her congregation in reminiscing at her wake. Most returned to fill the chapel for her funeral liturgy. Before her death Sister spoke of going “home,” and so to her “true home” she has gone. May she rest in peace.