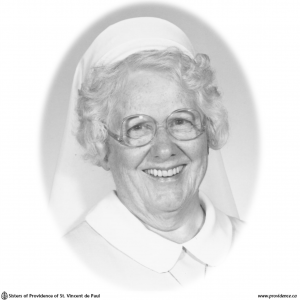 Spring was late coming in 1909, but Mary Margaret Theresa Hamilton arrived on time, on April 30 to be welcomed by her parents, Elizabeth (Donovan) and Robert, of Elgin. She also lit up the life of her two siblings who preceded her into this world, Gerald and Evelyn. Eventually, the family numbered seven girls and two boys.

While not without much joy, life on the farm was often a struggle and involved lots of hard work. Faith held an important place in the life of this family. Each spring when the Sisters of Providence came on “Collecting Tours”, they were received with great respect. It was then, Mary recalled, that the seed of a religious vocation was planted in her heart.

When Mary was thirteen, her mother, who was pregnant at the time, fractured her arm and so Mary was taken out of school to keep house until her lovely new sister arrived six months later. Mary eagerly returned to school knowing in her heart that she wanted to become a nurse. At the age of eighteen she began her training at St. Vincent’s Nursing School in Brockville. She graduated in 1930. While doing private duty and supervisory nursing the idea of entering religious life kept “haunting her.” The poem, “So many others I might ask-yet I am calling thee” kept going through her mind, and then, when returning from a party one night, she asked herself, “Is this all there is?” At the age of twenty-four, while sitting alone in the light of the full moon one night, Mary consciously said to her God, “OK, You win.” She entered the Congregation of the Sisters of Providence on September 8, 1933. Mary missed her family, especially her little sister who was only five, but Elgin was only thirty miles away and so her family came to see her as often as possible.

When Mary finished her Novitiate training she went to Brockville and began seven years on night duty, with no days off, a time which she called “at once a gift and a trial.” Sister Mary Robert, as she was now called, held many treasured memories of her time in Brockville, and she said that she felt very needed there.

From Brockville, Mary went to Montreal for five years, and then went back to Brockville before traveling to Moose Jaw, SK. There, she worked on the maternity ward for several months before being recalled to the East. She spent three years on night duty in Smiths Falls, where her duties included stoking the old furnace to keep it going.

In 1974, Sister Mary, along with Sister Olive Gibbons, was asked to set up a group home for developmentally challenged women in McKinley Centre. Although Sister accepted this mission with trepidation, she came to love the women, and was able to help them to become much more independent during her three years with them. Sent back to Brockville, Sister helped to set up a children’s ward, although she had no pediatric training. She fondly remembered her six years with the children there.

Sister Mary was in charge of medications at Rosary Hall in Edmonton and found that a nice experience. From there, she was asked to take a course in pastoral care and to minister in St. Mary’s Hospital, Camrose, AB. After eight years, before having to leave, she commented that much personal growth came with working with the people of Camrose and her life was immeasurably enriched by them. She was respected by doctors and ministers of all faiths. While in Camrose, Mary was involved in the Catholic Women’s League, and the pro-life movement.

When Mary returned to the Motherhouse she was in charge of pharmacy for a time but then relinquished this responsibility to be free to do what pastoral care was needed and also to care for the many plants in the building. Last, but not least, she spent much time praying for a weary, suffering world.

In many instances, Sister Mary was a pioneer, and although she went where she was sent with fear and trembling, she managed quite well to initiate new programs and then to freely turn them over to the care of others. Looking back on her life, she said that God was there with her through it all.

Mary was known for her ability to accept the changes in the church. She said that the “groaning and upheaval in the church and in religious life was a sign of new birth, and certainly many of the changes were overdue.” Although she lived a very busy, active life, Mary managed to find time to support her favourite football and hockey teams. Some of her other hobbies were gardening, reading, traveling, journalism, cooking and bird watching.

Perhaps, she was best known for her wonderful sense of humour and her compassion toward the poor and oppressed. A woman of courage and wisdom, she seldom complained, and until a few months before her death could be seen in all kinds of weather, taking part in the Friday Silent Vigil at City Hall in solidarity with those most affected by government cutbacks.

With a typical twinkle in her eye Mary said that at first, she thought she was doing the Lord a great favour by entering, but over the years the reverse proved to the case, and she was thankful for all the ways God walked with her. Mary remarked after more than a half century of service “if we can impart to our young women of the joy and fullness of life I have had, we do not have to worry about having enough Sisters for the future.” Mary’s optimism and spirit of gratitude was indeed a great gift to us all.

In August, 1998 Mary was diagnosed with inoperable cancer and after a short, painful, but courageous battle, died with dignity at Providence Motherhouse on October 13, 1998. Mary’s last days were very difficult but in the midst of her suffering she was more concerned about the welfare of loved ones she was leaving behind than about her own pain. The day before she died, Mary’s cousin, also a Sister of Providence, Sister Julia Hamilton, whispered in Mary’s ear, “Mary I’d really like to see you in heaven before I return to Guatemala Friday morning.” In her usual way of looking after the needs of others, Sister Mary fulfilled that request making it possible for Julia to be present at her cousin’s wake and funeral.

At Sister’s wake many of her relatives and friends and Sisters in religion shared warm stories of how she touched their lives. Many mentioned the love she had for her family, how she cooked many good meals for them all and loved to baby sit the babies. Her generosity and sense of humour were fondly remembered by everyone. The Mass of Christian Burial was celebrated in the Motherhouse chapel on Thursday, October 15, by her cousin, Rev. Paul Hamilton, assisted by several other members of the local clergy. In his homily, Father Paul commented on Sister’s strong desire to promote unity in the family and in the world. Like St. Paul, Mary too, “fought the good fight, finished the race and kept the faith.”

Sister will be missed by all who were privileged to know her and love her.