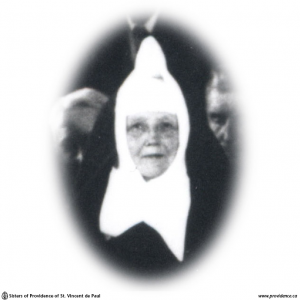 Sister Mary Harold (Anne Fowler) died suddenly on January 27, at the Marian Infirmary, Heathfield. Born at Mount Chesney, Ontario, near Kingston she was the daughter of Patrick Fowler and Mary Dillon. In 1907 she entered the Novitiate at the House of Providence, and from her profession in 1909 until her retirement to the infirmary in 1957 her life was devoted to the care of the sick and poor.

She spent 9 years on the Western missions. After a short term in Daysland, she was appointed in 1915 to the newly opened hospital at Moose Jaw, Sask. The Sisters were still carrying on the care of the sick in a private residence, and trying to collect sufficient money to commence building a hospital. Sister Mary Harold took an active part in the collecting as well as the work of the hospital. One item in the Moose Jaw annals runs as follows: “Sister Mary Harold and Sister M. Benignus left to collect. We could locate the two collectors from shipping points marked on crate after crate of hens, chickens, etc. that came pouring in as a result of their work. They returned with $275.00 in cash.” These collecting tours gave an opportunity for much Catholic action, when Sister M. Harold could tell of instances where the Sisters were able to give help to Catholics who lived far from church and were growing lax in the practice of their religion, and also to break down prejudice among non-Catholics.

In 1924 Sister was called to the House of Providence and here for over thirty years as Hospitaller of the Men’s Ward she proved herself by her charity, zeal and joyfulness in her work a true daughter of St. Vincent de Paul. As her Superior once remarked to a priest who was visiting the crowded quarters of the old House of Providence preparatory to the launching of the Marian Year Campaign: “There are people here that only Sister Mary Harold can care for.”

The last three years of her life in the infirmary were an intensive preparation for eternity – daily Mass, no matter how weak she felt (and looked); Way of the Cross; Rosary with the Community, when because of her slightly impaired hearing her responses often came loud and clear after all the others; short readings from the “Glories of Mary.” Her oft-repeated expression was “God’s will be done.”

On January 26th she was feeling very weak, although she was around as usual. The infirmarian suggested that she receive Extreme Unction, and while she herself thought there was no immediate danger of death, she agreed to have the chaplain anoint her next morning after Mass. A Sister visited her at midnight and found her sleeping quietly, her breathing regular. At 5 a.m. she was found dying. The chaplain, Father Keyes, a cousin of Sister M. Harold’s was there in a few moments but Sister had expired. Father anointed her, recited the prayers for the dying and then offered for her a High Mass in white vestments. We felt the Cum Jubilo Mass was most appropriate, for surely it is a cause for jubilation when a Spouse of Christ goes to meet her Bridegroom with the love and confidence that were Sister Mary Harold’s.

On January 29 in the Chapel of the Mother House the funeral Mass was offered by His Grace Archbishop O’Sullivan, assisted by Msgr. Hanley, with Rev. Fathers Flurey and Lynett as deacons of honour, Rev. Fathers Hendrix and Keyes as subdeacons and Rev. Father Walsh as master of ceremonies. Present also were Msgr. Walsh, Fathers Spence, Raby and Lamarche. Father Keyes recited the prayers at the grave. Four members of a family of eight, including Sister M. Esther of this Community, survive. Rev. Alex Fowler of the Kingston Diocese, now on sick leave, is a brother. R.I.P.

Sister had spent fifty-three years in religion. May her soul rest in peace!