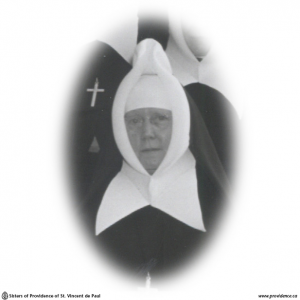 On May 16, 1969, Sister Mary Helena died at St. Mary’s of the Lake Hospital, Kingston, after a prolonged illness. Sister was born in Montreal, the daughter of Henry Vincent and Agnes Anna Cotter, and was baptized four days after her birth in the parish church of St. Henri. She was educated at St. Patrick’s Academy by the Sisters of the Congregation of Notre Dame, having completed requirements for admission to Normal School before entering the Novitiate of the Sisters of Providence of St. Vincent de Paul in 1924.

She commenced training for a nurse at St. Vincent de Paul Hospital, Brockville, in 1926, but her training was interrupted the following year when she was sent to Toronto for a course in dietetics. In 1929 she resumed her nurse’s training at Providence Hospital Moose Jaw, graduating in 1931. She remained in Moose Jaw for four years after graduation teaching dietetics and acting as superintendent of nurses. After one year as Superior of St. Vincent de Paul, Brockville, she was sent to take over the business office at St. Francis Hospital, Smiths Falls, and held that post for six years. St. Mary’s Hospital, Montreal was the next scene of her labours where from 1944 to 1952 she acted as purchasing agent and Supervisor of the Out-Patient Department. Then for thirteen years she was Supervisor of a floor at St. Vincent’s, Brockville. In 1965 ill health forced her to retire to St. Mary’s of the Lake Hospital, where she spent four years of intense and almost continuous suffering.

During her noviceship Sister had contracted rheumatic fever, and though she recovered she was left with a tendency to rheumatism, which later developed into rheumatoid arthritis, and for twenty-five years she was afflicted with this painful and incurable disease, frequently suffering acute attacks. Yet she forced herself after each attack to return to duty, and was able to give efficient service to her community and her fellow-sufferers.

For the last several months of her life to the suffering from arthritis was added that caused by a severe kidney infection. The excruciating pain she endured during these days we hope served as her purgatory, and we trust she was not for long after death deprived of the Beatific Vision. Her sister, Sister Alice Vincent, in charge of the Laboratory at St. Mary’s of the Lake was privileged to be with Sister during these years of final purification. Another sister, Mrs. R. C. Beck of Montreal survives. Three brothers predeceased Sister – Harry and Edward of Montreal and Brother Hubert, F.S.C.

At the request of St. Mary’s of the Lake Hospital, Sister’s body was kept there for the night of May 16th and a Mass was offered for the repose of her soul on the 19th. The body was then transferred to the Motherhouse and the funeral took place from there on May 19th. His Grace Archbishop Wilhelm concelebrated the Mass with the chaplain, Father Buckley, and gave all present permission to receive Holy Communion even if they had already received at an earlier Mass.

Sister Mary Helena will be remembered chiefly by her devotion to duty and her heroic efforts to forget her own suffering in ministering to others; in spit of the pain she was constantly enduring she was able for many years to supervise a hospital floor and keep cheerful and understanding with her staff as well as with her patients – an inspiration to all with whom and for whom she laboured.