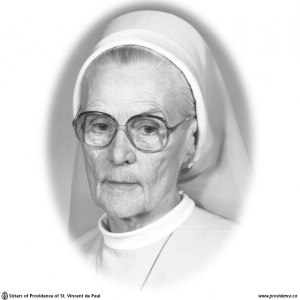 Margaret Gawley was born on September 28, 1912, in Lang, Saskatchewan the daughter of Joseph Gawley and Johanna Flannery. She grew up with two other sisters and two brothers. Their mother died young, leaving an infant son and four other children, the oldest of which was nine. Mr. Gawley, with the help of friends and neighbours, was able to keep the family together. Later, when Mary, the eldest girl, was old enough, she helped to take care of the family. Margaret retained a great love for her family and friends all her life. While in Marian II, she phoned her sister, Mary and brother, James every week, and she remembered their birthdays and other special events. As a young child, Margaret went to Marquette country school near the town of Palmer, and then within the town itself, when a new school was built there. After elementary school, Margaret had to go to Gravelbourg to continue her education. In Gravelbourg she attended high school at a convent belonging to the Sisters of Jesus and Mary. After high school Margaret decided she wanted to become a teacher, and consequently, she traveled to Moose Jaw to attend Normal School in 1930-1931.

Margaret began her teaching career in small town schools, and in some, had a hard time to be accepted at first because she was a Catholic. Her salary was $450.00 a year. Margaret returned to Palmer, where she herself had attended classes, to teach in the two-room school there. She taught in Palmer for five years and got along well with the other teachers with whom she shared the facility. Margaret taught in Pennant Saskatchewan for a year but then took a leave of absence for two months in order to be with her seriously ill sister, Helen, who died in 1940.

It was while visiting Helen in Providence Hospital, Moose Jaw that Margaret met some Sisters of Providence. She did not know much about them at first, but she loved their habit and soon grew very fond of Sister Mary Alphonse, who accompanied her, as well as Sisters Thaddea and Alberta, on their train trip to Kingston to enter the Novitiate in 1942. When they stopped over in Toronto, Margaret went to visit her sister, Mary, who was living there. However, she remembered that this caused a stir, because, having been independent for so long, she never thought to advise her companions where she was going, and so naturally, they let her know how concerned they were when she rejoined them. Three days after Margaret and her companions arrived at Heathfield, another classmate, Sister Gracia Whelan, entered bringing the class size to four.

Shortly after Margaret pronounced her first vows, taking the name Sister Mary Helen Rita, she moved to Chesterville where she taught grades 1 to 8 for five years. She visited the families in their homes and grew to like the people in Chesterville very much. Sister also taught primary grades in Kingston, Smith Falls, Batawa and Belleville until she retired in 1978. While living in Belleville, Sister dedicated much time and loving devotion to the training of many altar boys. After her retirement, she helped Sister Sarah McDonald in her classroom. She also served as sacristan at St. Joseph’s Church in Belleville, until a drastic change came into Sister Mary Helen Rita’s life in 1988. She suffered a stroke and when she failed to appear for lunch at the convent, was found helpless in the church by Sister Sara and Father Bernard O’Neill. After a couple of weeks in Belleville General Hospital, Sister was transferred to St. Mary’s of the Lake Hospital in Kingston. When it seemed that she would not recover, Sister was moved to the Motherhouse. Her dependence on others was a great cross for this woman of strong convictions, clear mind and love of self-reliance, to bear. Still, she strove to remain as independent as possible, and followed her own course of action as much as she could. Her fantastic memory helped her greatly. Her ability to remember many postal codes and telephone numbers was a source of amazement to others. In spite of being a very quiet person, Sister nourished long lasting friendships, and all her life she kept in touch with friends from her childhood, who loved heran often showed their appreciation for what she had done for them.

Sister Mary Helen Rita died a peaceful death in her room on Marian II at about 1 p.m. on September 11, 1996. A Sister who was with her that morning said that Sister Mary Helen Rita smiled and was happy to see her. They said a Hail Mary together. At her wake, her brother, James, her sister, Mary, other members of her family, congregation and many friends, remarked on Sister’s prayerful encouragement, her patience in suffering, and her great devotion to the Eucharist. The Mass was always the highlight of her day.

Archbishop F. J. Spence, accompanied by several priests, presided at the Mass of Christian Burial on September 13. In his homily, Archbishop Spence spoke of watching the birds going home to their nests at night, and he said that death is like going home to a place of rest at the end of life. He encouraged those present to celebrate Sister Mary Helen Rita’s going home to rest after a long and fruitful life. She was, in the words of a friend, a great Sister of Providence, and she will remain in our hearts and memories for a very long time.