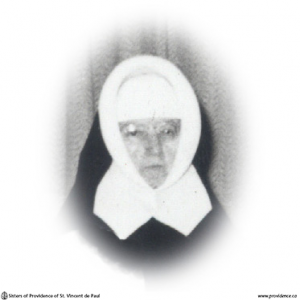 Mary Anne Theresa Stack was born in Arnprior Township on July 15, 1896, the daughter of John Stack and Margaret Hunt, both natives of Mount St. Patrick. Anne, one of the family of 11 children, was raised by god-fearing parents who believed in daily family prayer and in the values offered by Christian education for the children entrusted to their care. They all attended the separate school in Arnprior under the tutelage of the Sisters of Providence.

Anne, with the staunch faith, and perseverance of the Irish, entered the Sisters of Providence on August 15, 1914. When she made her first profession on December 12, 1916, she chose the name, Sister Mary Helen.

Sister’s impaired vision prevented her pursuance of further studies but her quiet determination led her to achieve expertise in many other activities because of her creativity and resourcefulness. To enhance her culinary arts, Sister followed courses in dietetics and nutrition; for several years, on many missions, Sister served her sisters with skill and generosity.

Sister M. Helen had a special love and compassion for the aged, infirm, and orphans. Her special attention and love were meted out to the little orphaned girls at St. Mary’s of the Lake. Sister also volunteered to care for an infant Corrigan girl whose mother died leaving six children. Sister’s charity meant that the family of six would not be separated.

Members of the Corrigan family attended Sister Helen’s wake service and funeral. They spoke feelingly of her love, compassion and understanding of their family problems and extolled her truly Christian caring for children. The Corrigans did not forget and will never forget Sister M. Helen Stack!

Later, when Sister’s life pattern changed somewhat, she revealed her expertise in beautifully executed needlework. Other artistic endeavours followed and those who viewed them declared these were “outstanding in craftsmanship”. For  27 years, her beautifully garbed dolls, displayed in the summer bazaar booths in Kingston, were highly prized and purchased by those who recognized talent, expertise, design and beauty in all Sister Helen’s creations.

Sister M. Helen Stack died on October 11, 1992, in the 79th year of her religious life. Archbishop Francis J. Spence, accompanied by several priests, offered the funeral Mass on October 14 and delivered the homily.