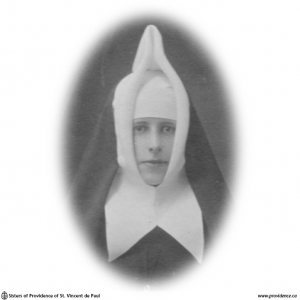 Sister Mary Helena whose name in the world was Catherine Mabel Joyce, was the daughter of Richard and Ellen Joyce of the Parish of Railton. On May 24, 1900, at the age of nineteen years, she entered our Novitiate having previously graduated from Notre Dame Convent.

She was a very bright, intelligent young girl and bid fair promise to be a valuable acquisition to our Community. She was advanced to the reception of the Holy Habit December 13, 1900.

But now contrary to all expectation, her progress was to be impeded. She took a violent pain in one knee, necessitating her being confined to bed. Doctor Phelan who attended her was not able to discover the cause, or to give permanent relief. She suffered greatly. Her strength began to fail; she grew very thin and weak. It was feared tuberculosis was at the toot of the trouble. At first she tried to study and keep up with the exercises of the Novitiate, but finally the doctor ordered complete rest of mind and body for one year at least.

Her parents were notified of this. They came and expressed much disappointment and regret, but did not propose taking her home as was expected, preferring rather to leave the decision of the case in the hands of the Community. The Community, too, desiring to give the subject every chance, permitted her to remain on. After a while she got a little better and was able to go about the Infirmary in an invalid’s chair. This she did for more than a year.

When the time came for Holy Profession May 3, 1902, she was sufficiently recovered to come down to the Chapel and pronounce her Vows.

As her strength increased, she performed light duties here and there. Had she had the good fortune to secure a Teacher’s Certificate before she left school, it would have been well. She was not physically able for any active laborious duty, neither would her delicate state of health permit her now to resume study.

In September 1905 she was appointed to St. John’s Convent, Perth, to assist in the school. She accepted the charge willingly, but after some months, an objection being raised that she was not legally qualified, she had to return home. The next year she was named to St. Vincent de Paul Hospital, but before the year was out, she had to return, being physically unable for the work assigned her.

In 1912 she taught for some months in Trenton and later in Arnprior. She had a good knowledge of Music, and taught for one year in Chesterville.

The most of her life was spent at the Mother House, assisting in the Offices as she felt able. She was frequently sent out with the Sisters collecting. These trips in the country always benefited her, and she enjoyed them.

In the autumn of 1924, feeling very poorly, she asked and received permission to go to St. Francis’ Hospital, Smiths Falls, in the hope that some treatment or medicine might help her. But no, she did not improve, and returned home much weaker and she left. It was plainly visible the end was not far distant.

From that day Sister went down very rapidly. Mr. Joyce died on Tuesday March 24th.  After the funeral on Thursday Sister received the last Sacraments at the hands of Rev. William Hogan C.S.S.R. who was at that time conducting one of our annual retreats. Very fortunate it was for our dear Sister that she had this advantage and all the Blessings that attended it. She died very resignedly and happy at 1.30 o’clock in the morning Saturday March 28, 1925 by the Reverend Father, the Superior General and Assistants aided her by their prayers.

How many of our dear Sisters die on Saturday! May we not hope our Blessed Lady comes to bring them into the presence of her adorable Son?