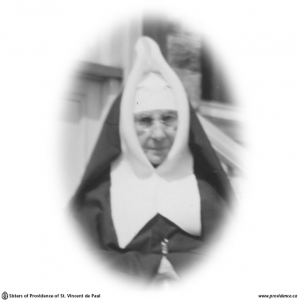 Sister Mary Henry died suddenly at the Marian Infirmary, “Heathfield” on April 27, 1966. Sister was born in Chesterville, Ontario, the daughter of Thomas McMahon and Mary Ann Kearney from whose family of six, three dedicated themselves to God as Sisters of Providence. Sister Mary of the Seven Dolors (Mary) for many years on the staff of St. Vincent de Paul Hospital, Brockville, died there in 1949, and Sister Mary Juliana (Eliza) who taught for twenty-seven years in Perth died in 1957.

Sister Mary Henry, as a graduate of Ottawa Teachers’ College with a few years experience in the schools of the Ottawa Valley district, entered the Novitiate of the Sisters of Providence in 1917. After her profession in 1919, she resumed a teaching apostolate which lasted over forty years, serving in the parishes of Brockville, Prescott, Belleville, Smiths Falls and Perth. In 1956 she was assigned lighter duties at St. Vincent de Paul Hospital, Brockville, where she remained until failing health obliged her to retire to the infirmary at the Mother House in 1963.

She had suffered from time to time heart attacks, but after a few weeks of rest would be up and around again. One evening she had recovered, as she thought, from such an attack, and had resolved to go to the chapel for Mass the following morning. At midnight she wakened with severe pain and called Sister Mary Alban, Infirmarian, who gave her medication and remained with her until she seemed to be over the attack. Sister Mary Alban on her way to chapel in the morning called at Sister’s room and found her sleeping quietly. Just before Mass started, Sister M. Alban went again to check Sister’s condition and she was dying. The chaplain, Father Flurey, came at once and Sister died while the sacrament of Last Anointing was being administered. The Mass which followed immediately was offered for the repose of her soul.

Sister Mary Henry will be remembered by all who knew her, Sisters in religion, pupils and other friends – for her zeal and efficiency as a teacher, her alert, inquiring mind which kept her a student until her last days; but especially for her quiet kindly manner and genial disposition which enabled her, as one of her friends remarked “to grow old gracefully”. And as she lived, so she died. The great devotion of her life was Holy Mass, and so it was to be expected that her last thought on the eve of her death was that she could assist at Mass in the morning. Surely Our Lord found her watching, her lamp filled with oil.