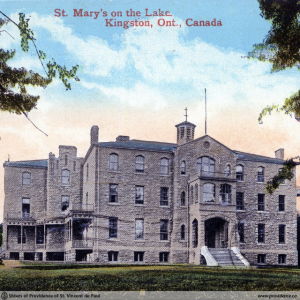 Eleanor Harrigan, the eldest of the four daughters of Barnabas Harrigan and Anne McGarvey, was born on January 5, 1885 in the parish of Railton, Ontario and was baptized on January 25 by Father Thomas Kelly at St. Mary’s Cathedral, Kingston.

In 1912 she entered the novitiate of the Sisters of Providence, then at St. Mary’s of the Lake, with the desire, as her letter of application states, of serving the suffering members of the people of God.

She made profession in 1914 as Sister Mary Hilary and for six years worked with the aged poor at the House of Providence (now Providence Manor). She was then assigned to the Western missions where she remained for eight years, two in Edmonton and six in Moose Jaw. She returned to Kingston in 1928 and except for three years at Father Dowd Home in Montreal spent the next thirty-eight years at the House of Providence.

She had a special talent for needlework and for most of these years she was engaged in the costume rooms of the Community making and mending the habits and cloaks of the religious. For countless Sisters, whose busy lives in the different apostolates of the Institute left them little time for sewing, Sister Mary Hilary’s generous, unostentatious services are not “unremembered acts of kindness and of love”. Many who came to pray at her casket recalled instances when they had been the beneficiaries of her acts of kindness.

In 1966 she retired to the Marian Infirmary and passed the last decade of her life in almost uninterrupted prayer. Her room was just a few doors from the Infirmary Chapel. Her strength declined gradually and, while she was frail and weak, she was able to be up and around until a couple of days before her death. Her family were notified of  her condition, but as they had enjoyed three or four days’ visit with her in May, when with eight of her companions she observed the Diamond Jubilee (60th anniversary) of religious profession, they felt that they had said their last farewell and did not come again until the time of the funeral. Death came quietly at 7:30 a.m. on October 11th; and as it was Saturday, when we have Mass at 10:30 a.m., our community Mass was offered for her within a few hours of her death.

One of her last remarks typifies the character of her simple faith and piety. Sister Monica Laton, Superior of the Infirmary, visited her and Sister M. Hilary asked her to say some prayers with her. “What prayers would you like?” asked Sister Monica. The reply – “The prayers your mother taught you.”

On October 14, His Grace Archbishop Wilhelm celebrated the funeral Mass, with Monsignor Bernard Walsh and Fathers Buckley and Pickett in the sanctuary. The morning was dull with threats of rain, but during the committal prayers at the grave the sun came out bright and warm; surely Heaven was smiling to receive a beautiful soul? May she rest in peace!