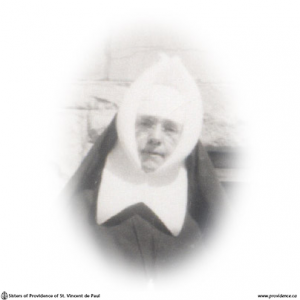 Sister Mary Hilda (Clara A. Quinn) died here at the Marian Infirmary on May 3rd, about 6 o’clock in the evening, after an illness of three months, during which she suffered a series of cerebral hemorrhages. After the first attack in February, Sister spent two months in St. Francis Hospital, Smiths Falls, but when it was evident that her case was beyond medical skill, she was brought here to the Infirmary. On April 30th she suffered a severe stroke, and although she lingered for four days, she never regained consciousness.

Sister M. Hilda, the former Clara Quinn of Ferguson’s Falls, Ontario, was educated at Lanark, and after one year of teaching, entered the Novitiate of the Sisters of Providence in January, 1907.

Her life was dedicated to the education of youth, and because she realized that a teacher must be always growing herself if she wishes her pupils to grow she never ceased being a student. She obtained her B.A. degree from Queen’s in 1924, and spent many summers taking special courses particularly in French and art.

Of her forty-two years as a religious teacher, twenty-eight were spent in Belleville, and the fine school situation that is found there today is due in no small measure to her untiring efforts and her ability to organize.

It was her ambition to provide for her pupils a truly liberal education. The strictly academic subjects were insisted upon; vocational subjects were offered; music and drama were given prominence; and her religious classes were motivated by the text she had once printed on her chalk board: “That they may have life and may have it more abundantly.”

Her interest in education went beyond her school. She was a member of the Committee who organized the OECTA in Toronto in 1944, and although she declined an invitation to act on the first Provincial Executive, she gave generous leadership on the district level. The Parent-Teacher Association also benefited from her experience and her zeal. The Sodalities of Our Lady remember her a a competent and devoted Moderator.

To her duties as educator were added for seventeen years in Lancaster, Belleville and Chesterville the burden of Local Superior of the Convent.

Her generosity and charity were equal to her ability in every line of work that fell to her lot, and it may be said that her illness, to a great extent, was due to over exertion in trying to fill in as teacher, nurse, etc., when the pastor and staff in Chesterville were laid up through illness.

On Saturday morning, His Grace offered Pontifical Requiem Mass for the repose of her soul. He was assisted by a nephew, Father Hickey of Ottawa, and the Cathedral clergy. Surviving members of her family are: three sisters and one brother, as well as several nieces and nephews.