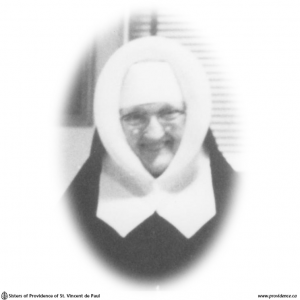 Sister Mary Hildegarde, eldest of ten children of Nicholas Rushman and Mary Ellen Servage, was born on December 5, 1897 at Crysler, Ontario in Alexandria diocese. She was educated by the Holy Cross Sisters and as a very young stenographer-bookkeeper in a law firm in Montreal was studying music and taking an interest in “The House of Good Works”. This was a centre conducted by lay persons, assisted by Jesuit priests. One of these priests, Father Cotter, advised Ann to find out something about the Sisters of Providence, Kingston. She did so with the result that she, on Sept. 8, 1914, entered the novitiate at St. Mary’s of the Lake.

After profession in 1916 she continued her study of music and for over thirty years she taught piano, directed choirs and was usually organist in parishes of the diocese. First in Trenton for a year, then in Tweed where she went in 1917 when a convent was established there; for a short period in Prescott and a number of years in Perth.

The longest teaching term – over 20 years – was at Providence Manor, Kingston. Her summers were spent in further study of music, with special emphasis on Gregorian chant at Pius X Liturgical School in Manhattanville, N.Y., and with the Trapp Family at their lodge in Vermont.  With Sister M. Genevieve she organized the Pius X Boys’ Choir, which for some years was one of the highlights of the musical culture of Kingston.

In 1949 she moved into the field of hospital work in which she was involved until her retirement in 1975. From 1949-1955 she was Local Superior of St. Mary’s Hospital, Montreal; from 1955-1961 she served as Superior and Administrator of Providence Manor; (During these years following the Marian Year Campaign she faced the formidable task of overseeing the expansion and renovation of the century-old building.) from 1961 to 1962 she was Superior at Holy Family Hospital, Vancouver; from 1962 to 1964 after a brief rest at Heathfield she studied business administration at Queen’s, and then became purchasing agent at St. Mary’s of the Lake Hospital. Here again she played an active part in the expansion and renovation of the institute.

In June 1975 she retired to Providence Manor and planned to spend her remaining years writing memoirs of the community with which her long active life had made her familiar. She commended the task and was very happy at it and apparently enjoying good health, although she knew that her heart had been for many years in precarious condition. On January 26, 1976 she suffered a stroke and two days later died at Hotel Dieu Hospital.

A large number of people called to view the remains or assist at the funeral Mass – priests, doctors, business men and women with whom she had worked at Providence Manor and St. Mary’s of the Lake. It was a wonderful tribute to her to hear these people speak of her and the tenor of the words was always the same; “She was so good to me.” “She did so much for mer.” Mr. Spada of Spada Tile Co., a generous benefactor of our Kingston houses, when reminded of his benefactions said with tears in his eyes, “I couldn’t do enough for her, for she couldn’t do enough for me.” Floral tributes were many and beautiful, but I am sure what Sister would appreciate more were the innumerable spiritual offerings, especially those from the employees of Providence Manor – the laundry staff, the kitchen staff, the housekeeping staff and the nurses from the different floors. She had time for everyone, members of her religious community and the people outside it; everyone knew she was interested in each person, especially if that person needed consolation in trouble, encouragement in difficulties or commendation in success.

May she enjoy the reward of all who cared for the least of the brethren of the master!