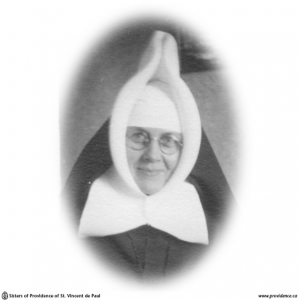 Anna Genevieve Masterson was born in Cantin, New York, on July 27, 1893, daughter of James Masterson and Eileen Foley, natives of Chesterville, Ontario. When Anna was a year old her parents returned to their native village and she grew up and received her early education in St. Mary’s parish, Chesterville. Later she graduated from Ottawa Teachers’ College and taught for some years in various schools of Ontario, meanwhile assisting her parents with the education of her younger brothers and sisters.

She was a competent teacher, happy in her work. But family traditions induced her to look, like St. Aloysius Gonzaga, for higher things. One of Mrs. Masterson’s brothers was the popular and beloved Father John Foley of Alexandria diocese, and one of her sisters was Sister Mary Bernard of the Sisters of Providence. Two of Mrs. Masterson’s cousins were also Sisters of Providence – Sister Mary Margaret and Sister Mary Florentina. And so in 1924, Anna joined her relatives in the Providence community.

After profession in 1926, as Sister Mary Ignatius, she resumed her apostolate of teaching in the parishes of Belleville, Arnprior, Apple Hill, Perth, Toronto and King. She spent twenty years in Kingston city schools, the last thirteen in St. Michael’s Portsmouth. At King, she added to her teaching duties those of Local Superior of the Sacred Heart Convent. She took a keen interest in professional activities, serving a term as president of the Kingston unit of Ontario English Catholic Teachers’ Association.

In 1962 after almost fifty years of labour in the classroom she retired to the infirmary but not to a life of inactivity. She continued to keep busy using her talent for art and needlework in the Occupational Therapy department, and helping to care for her sister, Sister Mary Fergus, who although her junior by ten years, had suffered a stroke and was unable to do much for herself.

Always thinking of others, she gave little thought to herself. Sisters had remarked that she did not appear well, but she made no mention of any trouble until it was too late. Insidious cancer was far advanced. On September 9, 1971, doctors performed surgery hoping to prolong her life for a few years. About the middle of October, she was discharged from the hospital and she made every effort to cooperate with medical attendants; but she did not regain her strength. Her suffering became intense and she could not force herself to eat.  On October 30th she was taken back to Hotel Dieu and on the 31st further surgery was attempted. But it was found that the cancer had advanced so rapidly that nothing could be done, and we learned that she had a very short time to live. On November 3, a message came from the hospital at 2 a.m. that she was worse. Sister Grace Maguire, Assistant, and Sister Mary Alban went at once to the hospital and remained until 6.30 a.m. Sister knew she could not recover and told the Sisters she was glad they had come. They came home for Mass and at 8.30 a second message came that Sister was dying. Sisters Grace and M. Alban returned to the hospital taking with them Sister Mary Fergus, but Sister M. Ignatius had died before they reached her bedside. As she was in intensive care, prayers could not be said aloud, and so Sister Gaffney of Hotel Dieu and Sister Mary Canice, who had come in earlier, recited the prayers for the dying in the waiting room.

The remains were brought to Heathfield in the evening and according to custom the Rosary was recited by the community. The following day many relatives came from Toronto, Chesterville and Ottawa. At the Bible vigil at 7.30 p.m. the rosary was said by Sister’s nephew, Brother John Masterson, S.J. of Regis College, Willowdale. On November 5th Father Lamarche of Chesterville led the recitation of the Rosary before the remains were brought to the chapel. In the absence of His Grace, Msgr. Hanley, Vicar General, offered the funeral Mass and delivered the homily.

Sister Mary Ignatius will be remembered as a splendid teacher who gave many years of devoted service to youth; as a generous collaborator in all activities of the community; but especially as a fervent religious whose unassuming life of prayer was in inspiration to all with whom she lived.