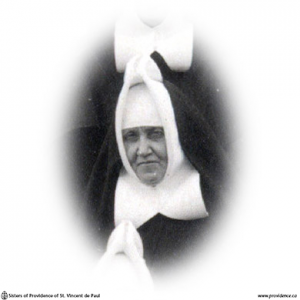 Our dear Lord has His own time and manner of calling labourers into His vineyard. He selects one here, and another a hundred miles distant, a third in a far-off land and so on. How strange it seems at times! The subject of our sketch, Elizabeth McMahon was the first vocation in that particular part of the country where Catholics were few and far between. It was a subject of surprise and wonder and something akin to pity, when the word went around that this young girl living in the obscurity and seclusion of her country home had suddenly decided to leave her parents and friends, and shut herself up in a convent. “What possessed her to do such a rash act?” The world thought and wondered, then went about their ways and forgot.

But for the young girl, it was a new life. She must begin life anew not minding what had gone before.

Considering a moment her beginning, she was born in the County of Dundas in the Township of Winchester, as few miles from what is now the village of Chesterville, May 9, 1847. Her parents Daniel McMahon and Margaret Welch came from Ireland and settled in that country when it was but a wilderness. What faith these people possessed! What heroism! There was no church, no school. They would see a priest perhaps once a year, but yet, they held to that faith, to their prayers, to their rosary. It is one of their children now that is called to devote her life exclusively to God’s service. At the time she lived, there was a church, a large congregation of Catholics, but yet Mass was celebrated only once in three weeks.

When Sister came to the Institute Nov. 20, 1872, it was comparatively young, but eleven years established, there was much to be endured, much hardship to be undergone, many painful things to be suffered. But she came with a will to do all that would be required of her and to submit to whatever trial or inconveniences that might fall to her lot. While not naturally inclined to great activity, she would take her share willingly of the burdensome tasks, working quietly and peacefully, apparently as satisfied with the more humble employment as with any other. Her Superiors, observing her humble, modest behaviour, advanced her to the Holy Habit July 18, 1873 and to Religious Profession Nov. 21, 1874.

A couple of weeks after her Profession she was sent to the mission of Holyoke, Mass. Here she was sent first to the kitchen, later to the dispensary and the other different departments. At the end of five years when the Superior General visited the mission, she thought well to bring her home. During the next year she was employed in sewing and light work. She visited her parents and family and did the collecting of her former parish.

The following August 1881 she was sent back to Holyoke, and given charge as Manager of one of the Houses – Mount St. Vincent, the Superior residing at the City House. In 1890 the two Houses being separated, she was appointed Local Superior of Mount St. Vincent.

In August 1892, at the time of the separation she answered the call of the Superior General, and came to Kingston with the other Sisters, preferring to remain steadfast with the parent tree. After becoming settled she took part in the ordinary works of the House.

At the next meeting of the General Chapter, she was elected one to the Assistants to the Superior General. At the close of the term she was re-elected. Like dear Mother Francis de Sales she held this position for five terms, which of itself, is a testimony of her prudence and good judgment.

In 1913 she was appointed Superior of St. John’s Convent, Perth, a position she held for four years. In Nov. 1917 she was recalled and made Local Superior of the Mother House, which office she held for a year. From that time her health began to fail. She had one serious illness, was confined to bed for some time. She finally recovered, but was never just as well. She was given a room near the Infirmary, and kept herself employed, doing mending and light sewing. Until a short time before her death, she continued to be up every morning for Mass and Holy Communion. For a while she was able to go down to the Chapel, but later assisted at Mass on the gallery, receiving Holy Communion after, in the Infirmary.

In the spring of 1926 she was poorly. On April 16, she took a weak turn, it was thought she was going to die, was anointed, but was not able to receive Holy Communion. She lingered on, the Sisters were with her frequently during these days praying with her. The Mass was offered for her Monday April 19th. She passed away quietly the next morning at 10.20 o’clock.

Rest in peace dear Sister. Faithful to the end, we pray that you will not forget those you have left behind.