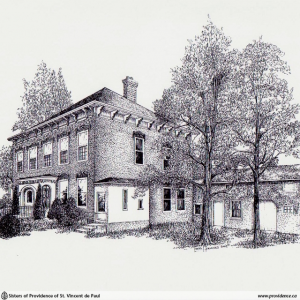 Sister Mary Imelda known in the world as Lucy Murphy was the daughter of Thomas and Johanna Murphy of the parish of Marysville. She was born Sept. 13, 1869.

When she wrote December 1911 asking admission into our Novitiate and enclosing a recommendation from her pastor, Rev. T.P. O’Connor, there was no hesitancy on the part of the members of the Council to accept her application, as she was well and favourably known to them, having boarded in the House during her term at the Model School some three years before. Her nice modest behavior and ladylike deportment were remarked at the time and left a favourable impression on all with whom she came in contact.

She was received into the Novitiate the last day of the year 1911. During her first year her free time was employed in the different works of the House. Giving satisfaction everywhere by her kind gentle manner, she was advanced to the Holy Habit Jan. 14, 1913. Much of her free time during the second year was given to study. She made Holy Profession Jan. 15, 1914. Succeeding in passing the examination for Middle School in July of the same year, she was sent to the Normal School in September.

Obtaining her Second Class Certificate, her first appointment was to the separate school in Brockville. Here she laboured very successfully for six years. In September 1921 she was appointed to St. Mark’s Prescott. Here she continued her zealous endeavors, a source of edification and comfort to her Sisters and an example to all with whom she came in contact.

In February 1923 she complained of illness and came to Kingston to see Dr. C.E. O’Connor, thinking perhaps the trouble was with her eyes. Not receiving much satisfaction, she asked to stop off in Brockville on her way back to see her former physician Dr. Moles. He examined her thoroughly, whether or not he gave her any information, she returned to her mission and in a few days to her class. A couple of weeks later, the Superior General being in Prescott, she was surprised to learn that Sister was ill, that she had serious heart trouble, and that she might be taken off at any moment. Considering this condition, our Mother thought well to have Sister return and make the retreat which was opening the following week. Sister came and made the retreat, and feeling better after, returned to her mission. Her strength began to fail, but she continued to teach for two years longer, preferring to remain at her post.

In 1925 she was frequently out of her class for a week or more. A substitute had to be provided. She returned in September, but it was with difficulty she held out until the end of the month. Early in October she had to give up, and go to St. Vincent de Paul Hospital. Here she was given every care and attention. It was hoped that with rest, fresh air and sunshine, her former health might be restored. She appeared hopeful herself, spent the days on the balcony when at all possible.

How very sweet and amiable she was, no complaint, no murmuring!  It was a pleasure to be in her company. When all efforts failed, when there was no longer any hope of recovery, she was brought to the Mother House on April 10, 1926. The journey was hard on her, she was very fatigued and weak. The doctor seeing her advised that she be prepared without delay. She received the Last Sacraments the following day on April 11th. She recovered somewhat, but never to be up again. However she continued very happy, happy that she had reached home and grateful for every attention. She lingered on gradually growing weaker. On July 6th, she was anointed a second time. The next evening on July 7th, as the Angelus Bell was ringing she took a weak turn. The Community assembled as soon as possible and remained with her until the end repeating the prayers over and over again. At 6 o’clock it was thought well to call one of the Fathers at the Palace. All the priests being out, Rev. Father James Fallon stopping at his brother’s was called. He was in, in a few minutes. He said the prayers of the Ritual, many Litanies, then began the Rosary. At the second decade there was a slight movement of the muscles of the face, then a smile, and the spirit was gone.

May we hope our little Sister Mary Imelda was a second little Teresa? We cannot say – We know she was good. But to be on the safe side we must continue to pray for her. May she rest in peace.