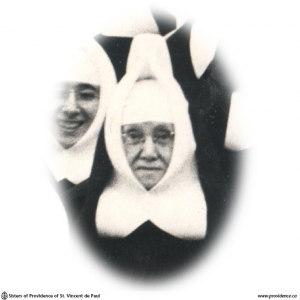 Sister Mary Inez, (Catherine Mary Manion), a daughter of Lawrence Manion and Johanna Devine, was born in the parish of Corkery, Ottawa diocese, and educated in the local school and Notre Dame Convent, Ottawa. When Mr. Manion died at the age of fifty-one, Mrs. Manion and her two children moved to Almonte and Catherine entered the Novitiate from that town in 1915. After profession in 1917, Sister, having shown talent for music, was given further training in that art, and later taught piano and violin in the studios of Belleville, Trenton, Glen Nevis, Apple Hill, Arnprior, Prescott and Tweed.

While serving as Local Superior at St. Carthagh’s, Tweed in 1936, she was stricken with Parkinson’s disease which became progressively severe over a period of thirty-four years. Those of us who knew Sister Mary Inez intimately, knew her active, zealous, sensitive disposition, realize what a heavy cross she carried for these many years. This cross was borne with extraordinary resignation and patience. No impairment of her intellect dulled her pain of mind or body; but the mental alertness enabled her to assist at Mass and receive Holy Communion until a few days before her death, and to respond, though very faintly, to the prayers being recited during her last hours.

She died on April 30, at 7.30 a.m. and at 7.30 p.m. the same day, Sister Mary Florentina died. The one funeral Mass was offered for both Sisters by His Grace Archbishop Wilhelm on May second. Pallbearers for Sister M. Inez were her cousin, Sister Mary Frances Teresa Vaughan, and three of her novitiate companions – Sisters Mary Philip, Alice Vincent and Mary of the Sacred Heart, who had observed with her the fiftieth anniversary of profession on April 19, 1969.

Sister is survived by her brother Angus Manion of Welland, Ontario and his two daughters, Joan of Almonte and Aldyne on Ridgeway, Ontario.