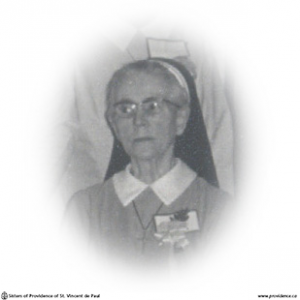 Loretto Doyle was born on October 18, 1892 on a farm home near Chesterville, Ontario.  Her parents, Peter Doyle and Sarah McMahon, died when she was still young and she went to live with a married sister several years her senior.

On August 15, 1919, she entered the novitiate of the Sisters of Providence and made profession as Sister Mary Iona on August 31, 1921.

Her talent in the culinary art was detected in the early years of her religious life and for the greater number of her fifty-three years as a professed sister she was in charge of the dietary departments of our largest institutions. In the late 20’s she went to Edmonton and served there in Rosary Hall, St. Mary’s Home for Boys and St. Joseph’s Hospital. In 1951 she was transferred to St. Anthony’s Home, Moose Jaw, Saskatchewan, and remained there for fifteen years. While at that mission she added to her duty as dietary supervisor that of assistant to the Local Superior.

Failing health necessitated her recall to Ontario in 1966, but she was able for four years to look after the housekeeping in the small mission of Chesterville, her home village. In 1970 she retired to the Marian Infirmary at the Mother House. Here she followed the spiritual exercises of the community and kept busy in the occupational therapy department. A bed spread she crocheted was sold for $20.00.

On September 8th, after suffering discomfort for some days from upset stomach and inability to eat, she was admitted to Hotel Dieu for treatment. On the 20thth she was to be discharged, but that morning at 2 a.m. she suffered a severe heart attack and was taken to the Intensive Care Unit. Sister Grace Maguire and Sister M. Alban went to the hospital and spent the remainder of the night with her. For a week she remained in critical condition, and although she seemed stronger at times and was always conscious and cheerful, doctors and nurses held out no hope of recovery.

Sisters stayed with her almost continuously, Sisters M. Alban, Dunstan, Therese and Mary Hamilton keeping most of the vigils. Sister Margaret Rose, Superior, visited her frequently, and spent some time with her on the afternoon of the 28th. As she did not appear to be in imminent danger of death, Sister left and five minutes after she had gone Sister May Iona quickly slipped away. The nurses called Sister Gaffney, Hotel Dieu Sister whose duty it is to keep close watch on the very ill and who was very kind to Sister M. Iona. Sister Gaffney called the priest, who came immediately and recited the prayers.

Sister Mary Iona’s death was like her life. Quiet, uncomplaining and cheerful she had been throughout the fifty-five years she spent in religious community, devoted to her spiritual exercises and to the work assigned her by obedience, in which she could practice many acts of kindness to her sisters.

His Grace offered the funeral Mass on October 1st, assisted by Father Buckley.  Monsignor Walsh of St. Joseph’s was present, and also Father Clement. All the Sisters who could be spared from their work from Providence Manor and St. Mary’s of the Lake joined the Heathfield Sisters to accompany the remains to the cemetery. Two nieces, Mrs. Grace Wallington and Mrs. Gertrude Cooke, came from Toronto.

Her fine example of a fervent religious life will long be remembered.