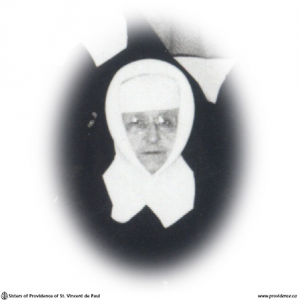 The daughter of Nicholas Jordan and Catherine Donovan Jordan, Mary Angelus was born on March 24, 1883 at Forest Mills, Ontario, a village now in the parish of Richmond, a mission of Read parish. She was baptized on April 8 in St. Patrick’s Church, Napanee.

Her father died when the four children were very young, but the mother managed to carry on the farm successfully so that Mary Angelus was able at the early age of seventeen to respond to the call of God to serve Him in religious life. In 1900 she entered the novitiate of the Sisters of Providence and after the completion of her noviceship, was registered, as Sister Mary Irene, in the Training School for Nurses at St. Vincent de Paul Hospital, Brockville. She graduated in 1906, and then entered on a career of caring for the sick that was to last over half a century.

She spent a few years in the hospitals of Brockville and Smiths Falls, and in 1912 joined three other pioneers who opened a hospital in a rented house at Moose Jaw, Saskatchewan. In 1916 she assisted the Superior, Sister Mary Angel Guardian, to turn the first sod for the new building, and she was acting as Vice-President of the Corporation when the hospital was incorporated in 1917.

In 1918 she was transferred to Daysland, Alberta and served as Local Superior of the hospital for six years. While on active duty in the hospital she specialized in X-ray work, and in 1945 she returned to Ontario and took charge for five years of the X-ray department in St. Francis, Smiths Falls. In 1949 she came to St. Mary’s of the Lake, Kingston, where she was able to render valuable service for thirteen years. In 1962 she retired to the infirmary at the Motherhouse and the following year observed the Diamond Jubilee of her religious profession.

The sixty years of strenuous work had taken its toil and Sister Mary Irene’s robust physical and mental health succumbed to the onset of advanced age, and she soon needed the constant care given to a child. On October 7, 1969, she developed bronchopneumonia and never recovered from its effects. She died on the Feast of All Saints, November 1, about 9.30 p.m.

Another venerable member of the Community, Sister Mary Alacoque, who had been Sister M. Irene’s companion on the western missions, died the following day, and the double funeral took place on November 4. The chaplain, Father Buckley, offered the Mass and four nephews of Sister Mary Irene acted as her pall bearers. Several relatives were present, among them a niece, Sister Elizabeth Jordan, C.N.D. of Cornwall. The only surviving member of her immediate family, Mrs. Lucy Walsh of Belleville was unable to the funeral, but had been able to drive to Kingston to view Sister’s remains the preceding afternoon.