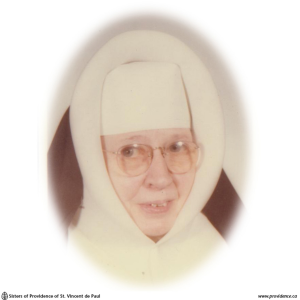 Alfred Seguin and Margaret McPhail were both born in St. Andrews. When they married and settled on a farm, it was in that same Eastern Ontario area, and there they raised thirteen children. Two of these children entered religious life.

The eldest girl, Elizabeth, was attracted to the Congregation of Notre Dame, where she took the name Sister Mary Geraldine. Unfortunately, very early in her life as a religious, she contracted tuberculosis. Her father built a gazebo near the family home, where she could stay outdoors in the healing sunlight, and the Congregation agreed to allow her to stay with her family. There she made her final vows and died in 1908 at the age of eighteen.

The third oldest girl, Anna, had a very different and much longer vocation story.  Anna was born on October 15, 1895. After early schooling in the St. Andrew’s area, she went to Provincial Model School at Cornwall. Only the equivalent of Grade Ten was required for admission. In 1917 she graduated with a Limited Third Class Certificate which would allow her to teach for five years. Her first job was near home at S.S. #16 Lancaster. It was a difficult position because many of the students were from French speaking families, but lessons were given only in the English language. However, her natural ability as a teacher and her few months of training at Model School made her equal to the task. One of her Grade Eight students was Margaret McDonald, of Glen Nevis, who was to become, in 1971, the Superior General of the Sisters of Providence of St. Vincent de Paul.

Anna was only a year and a half at that first school. She moved next to “Meadow Bay School” – S.S. #22 Charlottenburg. After a year there the influence of the local Orange Lodge caused her to lose her position. She was replaced by a Protestant teacher who had a First Class certificate. However, she had been thinking of making a change anyway. During that school year -1920-21 – she had been in touch with Mother Mary Clement (Shea), Superior General of the Sisters of Charity of the House of Providence. Together they had been questioning whether or not God was calling her to give her life to Him as a religious Sister. By July she “felt more decided and satisfied” and asked permission to enter.

As a postulant Anna continued teaching, this time at St. Mary’s School, Kingston. When it was time to ask for the Holy Habit, she was able to say that she “had learned that true happiness is found in serving God alone”. All of her official request letters have similar pious expressions and there is no reason to doubt their genuineness for her family noted she “had always been religious”. Her retreat notes of later years show the same simple and stable faith.

Her novitiate training completed, Anna pronounced her first vows in 1923 and took the name of Sister Mary Irma. Immediately she was sent to teach again. The Superior in Prescott was ill and she was sent to replace her in Form IV. From Prescott she went in January, 1924, to St. Joseph’s School on the new mission of Lancaster. Outside of the year 1927-28, which was spent attending Ottawa Normal school to improve her qualifications, Sister continued steadily in the apostolate of the classroom until she had completed over forty years as a teacher. As well as the missions mentioned above, Sister Mary Irma taught in Brockville, Chesterville, Perth, Tweed, Trenton, Picton and St. Paul’s, Kingston.

Gradually through the 1930’s and early 1940’s Sister obtained some Upper School credits and in 1944 she received a Permanent First Class Teaching Certificate. By then she was already a master teacher. She had finely honed her classroom skills by days of effort and attention. Particularly challenging for her were the years in Brockville when she had the Grade One class – all boys. Father Paul McAvoy remembers her well and remarked that his “Grade One year was a very happy one” even though he had to accept proper chastisement for lighting every vigil-candle in the church while depositing only one thin dime. First Communion classes in those days had to fast from midnight Father rec alls how diligent Sister was in trying to prevent the fast from being broken so that no young lad would be disappointed. Her skilful combination of solid education, good humour and obvious caring were effective no matter what grade she taught. One principal described her as a “capable, industrious, diligent teacher and an excellent disciplinarian.”

Sister M. Irma retired from teaching in 1964 and came to the Motherhouse in 1969. Through all these years her spirituality had been deepening. In 1971 she wrote, “Jesus is my best friend. I must tell Him often my joys and sorrows, thank Him for the many graces He has given me, especially for the grace of my Holy Vocation, which I appreciate more and more each day.” She believed that, “We are called upon to be true food for one another. (If we) feed upon Christ…then we can have the strength to stand as food for others.” In her final years, as her health declined, she moved to the Marian Infirmary. A visit with her there was nourishing for she was a good conversationalist, always happy to welcome callers and interested in the lives of others.

On December 18, 1985, around 6:00 a.m., Sister Mary Irma fell in her infirmary room and suffered a broken hip. This was the second time she had had such a fracture. She recovered well from the first break, but now, with her general health at a low ebb, the accident brought on a heart attack. She was taken to Hotel Dieu Hospital at 7:30 a.m. and her family was summoned. Her brother, Wilfrid, his son, Jack, and a sister-in-law, Marie (wife of Earnest) came to be with her. It was most fitting that they were able to be with her at this time, for she had great devotion to her family. One of the Sisters who had accompanied her to her home at the time of her father’s illness was much impressed with her solicitude for all the family members.

When the relatives left at 11:00 p.m. to take a few hours rest, Sister Nancy Wilson, Superior General, and Sr. M. Denise (Closs) took up the vigil. They had not long to wait. At 11:30 p.m. Sister Mary Irma was called to meet, face to face, Him whom she so simply and ardently loved and served.

The funeral Mass on December 21 at Providence Motherhouse was concelebrated by Archbishop F.J. Spence, Fr. J. Rozon, Fr. D. Clement, Fr. F. O’Connor and Fr. L. Byrne. The Gospel reading was the Parable of the Bridesmaids, and, as Archbishop Spence, said in his homily, it was most suitable, for Sister M. Irma had been happy to have Christ as her spouse and had kept her lamp burning bright for the time of His coming. The light which she brought to the world shall not be put out.