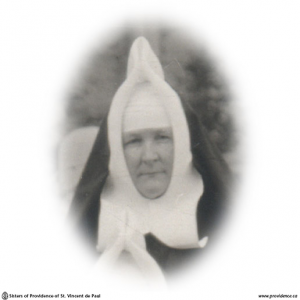 Formerly Miss Elizabeth Anne McNamee, a native of Stanleyville, Ont., she entered the Novitiate at the House of Providence, Kingston, on April 23, 1901.

After her profession in 1903, Sister was sent to Brockville to complete her hospital training at St. Vincent’s. She was later stationed for a number of years at St. Francis Hospital, Smiths Falls, Sister also spent some time in Moose Jaw, Edmonton, Daysland, Winnipeg, and finally in Montreal.

Sister possessed a cheerful, bright disposition, and was blessed with a delightful sense of humour to the last. Her patient endurance during the long months of suffering before her death was most edifying. She had the consolation of seeing all her brothers (five) shortly before she died. They were very devoted to her as she was their only sister.